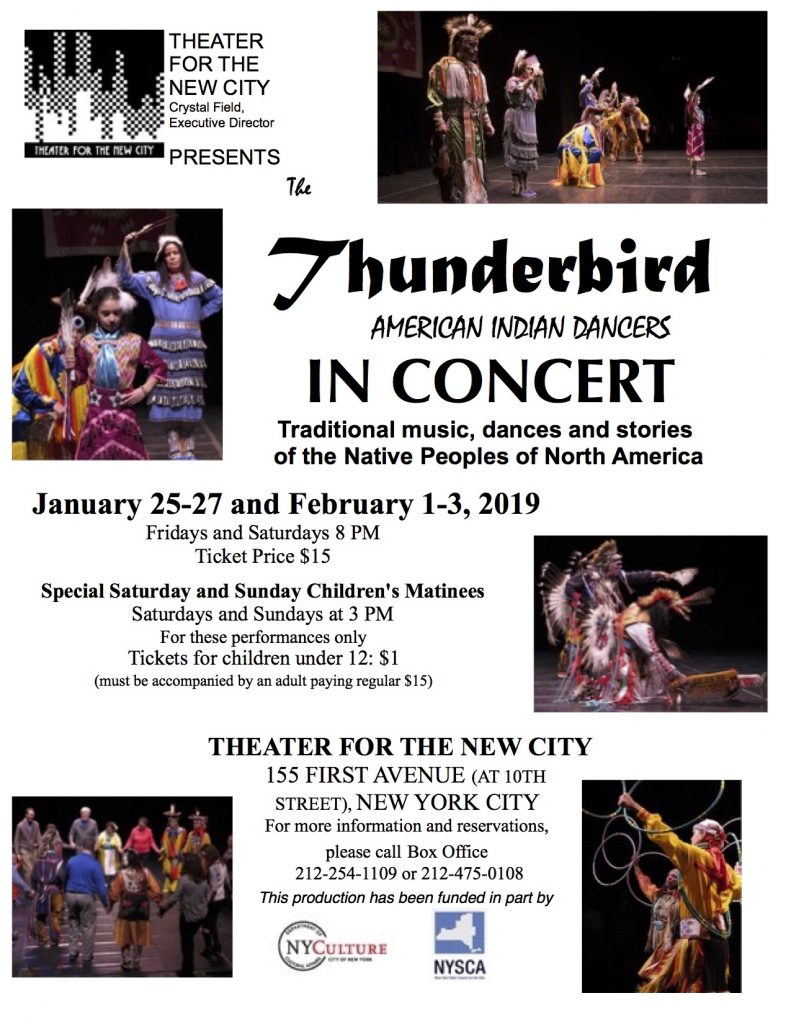 NEW YORK, October 22 — Theater for the New City, 155 First Avenue, will present its 44th annual Thunderbird American Dancers Dance Concert and Pow Wow from January 25 to February 3, 2019. There will be dances, stories and traditional music from Native Peoples of the Northeast, Southwest and Great Plains regions. The event has become a treasured New York tradition for celebrating our diversity by honoring the culture of our first Americans.

Pageantry is an important component of the event, and all participants are elaborately dressed. There is a wealth of cultural information encoded in the movements of each dance. More than ten distinct tribes will be represented in the performance. The dozen-or-so dancers are people of all ages, ranging from nine-year-old Isabel Cespedes (Mayan) to retirees.

Throughout the performance, all elements are explained in depth through detailed introductions by the troupe’s Director and Emcee Louis Mofsie (Hopi/Winnebago). An educator, Mofsie plays an important part in the show by his ability to present a comprehensive view of native culture. Native American crafts, jewelry will be sold in the TNC lobby.

Matinées are kids’ days when children aged five to twelve accompanied by a ticket-bearing adult are admitted for $1.00 (adults $12). At the conclusion of these matinées, young audience members are welcome to the stage to be photographed with the dancers. This component of the show was inspired by the troupe’s school residencies. Says Louis Mofsie, the Thunderbirds’ artistic director, “Educators try to supplement the kids’ knowledge of Native Americans and to teach them about different cultures. But the emphasis is on how we used to live, in the past tense. The kids are never taught how to relate to us in the present. Now they can meet us, and be photographed with us, and it’s present tense. It’s more than just seeing us on stage.” He adds, “Learning about different cultures is important to enlarge the kids’ perspective, particularly in light of what’s going on in the world. We’re in trouble today because we don’t understand different cultures.”

In September, 2017, Mofsie was honored, along with Garth Fagan and Martha Myers, with a Lifetime Achievement Award from American Dance Guild.

The Thunderbird American Indian Dancers are the oldest resident Native American dance company in New York. The troupe was founded in 1963 by a group of ten Native American men and women, all New Yorkers, who were descended from Mohawk, Hopi, Winnebago, and San Blas tribes. Prominent among the founders were Louis Mofsie (Hopi/Winnebago) and his sister, Josephine Mofsie (deceased), Rosemary Richmond (Mohawk, deceased), Muriel Miguel (Cuna/Rappahannock) and Jack Preston (Seneca, deceased). Some were in school at the time; all were “the first generation,” meaning that their parents had been born on reservations. They founded the troupe to keep alive the traditions, songs, and dances they had learned from their parents and added to their repertoire from other Native Americans living in New York and some who were passing through. Jack Preston taught the company its Iroquois dances, including the Robin Dance and Fish Dance. To these were added dances from the plains, including the Hopi Buffalo Dance, and newer dances including the Grass Dance and Jingle Dress Dance. The company was all-volunteer, a tradition that exists to today. Members range in professions from teachers to hospital patient advocates, tree surgeons, and computer engineers. Now Louis Mofsie says, “To be going for 50 years is just amazing to me, and to be able to do the work we do.”

The troupe made a home in the old McBurney YMCA on 23rd Street and Seventh Ave. Within three or four years, they were traveling throughout the continental U.S., expanding and sharing their repertoire and gleaning new dances on the reservations. A number of Thunderbird members are winners of Fancy Dance contests held on reservations, where the standard of competition is unmistakably high.

The Thunderbird-TNC collaboration began in 1975 when Crystal Field directed a play called “The Only Good Indian.” For research, Ms. Field lived on a Hopi reservation for three weeks. In preparation for the project, she met Louis Mofsie, Artistic Director of the group and a representative of the American Indian Community House. They made plans for a Pow Wow to celebrate the Winter Solstice. The event has continued annually to this day.

The troupe’s appearances benefit college scholarship funds for Native American students. The Thunderbird American Indian Dancers Scholarship Fund receives its sole support from events like this concert (it receives no government or corporate contributions), and has bestowed over 350 scholarships to-date. Theater for the New City has been presenting Pow-Wows annually as a two-week event since 1976, with the box office donated to these scholarships.

*$15 general admission. MATINEES ARE KIDS’ DAYS: At all matinée performances, children ages five to twelve who are accompanied by a ticket-bearing adult are admitted for $1.00 (adults $15). Not recommended for babies and children under five.