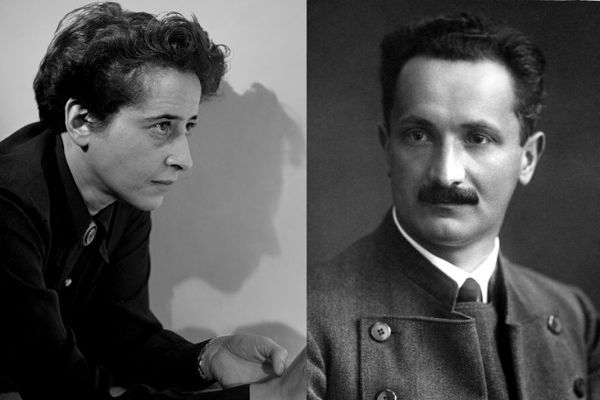 By Douglas Lackey
Directed by Alexander Harrington
Thursdays through Saturdays at 8:00 PM, Sundays at 3:00 PM

THEATER FOR THE NEW CITY presents: 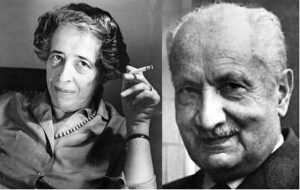 Hannah Arendt was a brilliant political theorist and a philosophical thinker of the first rank. As a teenager, she commenced an affair with Martin Heidegger, a celebrated German philosopher who went on to become a leading and unapologetic supporter of Adolf Hitler. After World War II, Arendt maintained her friendship with Heidegger, met with him and corresponded with him, despite Heidegger’s silent refusal to disavow the Nazi party. The play explores how this could have happened. It probes deeply into the Arendt/Heidegger affair by presenting sides of Heidegger as Arendt saw them: the charismatic teacher, the intriguing student of the human condition, the lover of art and poetry.

A play on such characters would seem to be a play of philosophical and political ideas, but this one is first and foremost a compelling love story. It dramatizes the power of the combination of sexual and intellectual attraction. Lackey writes on the play’s website, “Arendt connected with Heidegger physically, emotionally and intellectually. This is a story of a woman in love, no ordinary woman and no ordinary affair.”

Simultaneously it introduces the audience to elements of Heidegger’s philosophy which are a significant part of 20th-century existentialism. While these ideas are appealing to the contemporary, secular New York theater-going audience, the play shows their darker side. It reveals how Heidegger’s glorification of the irrational fed into the anti-rationalism of Nazsim (though, as Lackey points out, most critics of rationalism were anti-Nazis) and, by extension, the irrationalism that is currently having a renaissance.

The play also explores the possibility that Heidegger’s decision to join the Nazi party and tout Hitler was self-serving. This begs comparison with the determination of so many conservative ideologues, who previously denounced Donald Trump, to support him. History does not repeat, but it instructs. We are living in a time when autocratic nationalism and open racism (both genuine and opportunistic) are re-emerging. Philosophers are not left out of the picture. Dead ones like Ivan Ilyin (the only fascist thinker to be revived in our century) are guiding the likes of Putin while living ones are again bending with the wind.

Douglas Lackey reflects on related issues on the play’s website (http://arendt-heidegger.com/playwright.htm#notes), examining whether Heidegger’s “Being and Time” is actually a Nazi book, the role of drama for philosophers, and the challenges of presenting Heidegger as Arendt saw him.

Playwright Douglas Lackey has two lives, as a playwright and a philosophy professor. He is a Professor of Philosophy at Baruch College, CUNY, where he has taught since 1972. But he has a 14-year relationship with the Theater for the New City, which has presented all his plays to-date. His first play presented there, “Kaddish in East Jerusalem” (2003), dealt with issues of the Second Intifata.. His “Daylight Precision” (2014) was a historical drama examining “just war” theories through an unsung hero of World War II, Gen. Haywood Hansell. His last play was “A Garroting in Toulouse” (2016), set in the Thirty Years War, which dramatized the differences, still with us, between the Protestant sense of sin and the Catholic sense of redemption.

Lackey writes, “I am grateful to Crystal Field and Theater for the New City for encouraging me to present the story of these two philosophers and their astonishing relationship. As a philosophy professor, I have tried to convey the deep resonances of their ideas and the calamitous circumstances in which they were produced. Here is a case of a simple union of souls coupled with a complicated diversity of minds. This play is a special tribute to the person who was, in my estimate, the most independent woman of the twentieth century.”

Director Alexander Harrington staged the premiere of Douglas Lackey’s “Daylight Precision” in 2014. He has directed in New York theaters at Metropolitan Playhouse, La MaMa, The Culture Project, Queens Theatre, and The Actors Studio and at many regional theaters.  He founded The Eleventh Hour Theatre Company and was 2012 artistic director of the student ensemble at HB Studio. He has directed his own adaptations of Dostoevsky’s “The Brothers Karamazov,” Chekhov’s short story “The Kiss” and a chapter from Sherwood Anderson’s “Winesburg, Ohio” titled “The Philosopher.” He translated and directed Aeschylus’ “Agamemnon” and wrote a large-cast play, “The Great Society,” about Lyndon Johnson.  Harrington takes a special interest in classics and has directed numerous productions of Shakespeare and Greek tragedies. He has also developed and directed numerous contemporary plays and is widely published as a scholar and critic.

Harrington’s productions have been widely praised for their simplicity, resourcefulness, expert acting and clarity of vision. The New Yorker (Liesl Schillinger) deemed his “Brothers Karamazov, Part I” a “gem of a production,” adding, “the cast is remarkable.” The New York Times (Margo Jefferson) wrote that part II of the adaptation was “resourcefully staged and intelligently dramatized.” The New York Post (Donald Lyons) described his “Henry V” as “superb,” deeming it “a riveting meditation on the heart of the matter – the simultaneous cruelty and glamour of power.”