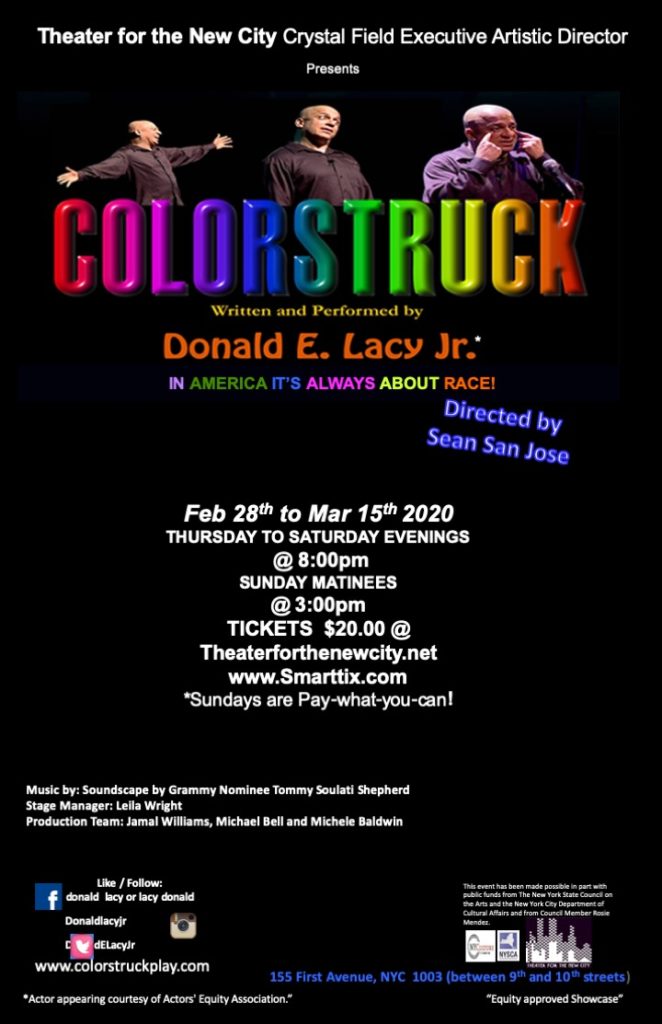 From February 27 to March 15, Theater for the New City (TNC) will present comedian/actor/broadcaster Donald E. Lacy Jr. updating his one man show, “ColorStruck,” a bittersweet examination of how cultural assumptions drive American society. Since national politics provide a never-ending supply of new material, the piece is continually reshaped. The velocity of change since TNC presented the show’s New York debut last year (Feb-March, 2019) has inspired Lacy to initiate a new version that reflects pressing current events.

Lacy’s gift is in using humor as an icebreaker to bring all races to the racial colloquy. Paul Berss (NY Theatre Wire) characterized last year’s production as “a seamless ride from hate and injustice to funny and heartwarming, all artfully blended and delivered by a master entertainer who is at once an actor, a comedian, a thinker and an activist.”

The piece is undergoing development as of this writing. New topics will include Lacy’s surprise lessons from participating in the recent Conservative Political Action Conference (CPAC) prison reform summit in Philadelphia. In a surprising act of bipartisanship, this group helped get thousands of nonviolent offenders released around Thanksgiving. Other new subjects will probably include the impeachment, the fragile situation in the Middle East, tribal symbolism in the upcoming national election and the racial context of Megan and Harry leaving the Royal Family. There is also much new multimedia: the piece now begins with a live five-minute prologue by spoken word artist VinDesh about the status of free thought in 2020 America and a brief video talk by Jane Elliott, pioneer of the Blue Eye/Brown Eye Experiment in 1968, discussing racism as a mental illness.

The piece was born in California’s Bay Area and has been presented on college campuses around the country and at the National Black Theatre Festival. It was performed twice for the U.S. Congressional Black Caucus. It begins as a comedic autobiography of a sensitive, light-skinned African American man growing up in Oakland during the height of the Black Pride movement. It recounts how, as a child, Lacy was shunned by some people in the black community for not being dark enough and ostracized by some members in the white community for being too dark. It develops into an examination of how cultural assumptions underlie institutionalized racism. Director is Sean San Jose; soundscape and music are by two-time Grammy nominee Tommy Soulati Shepherd.