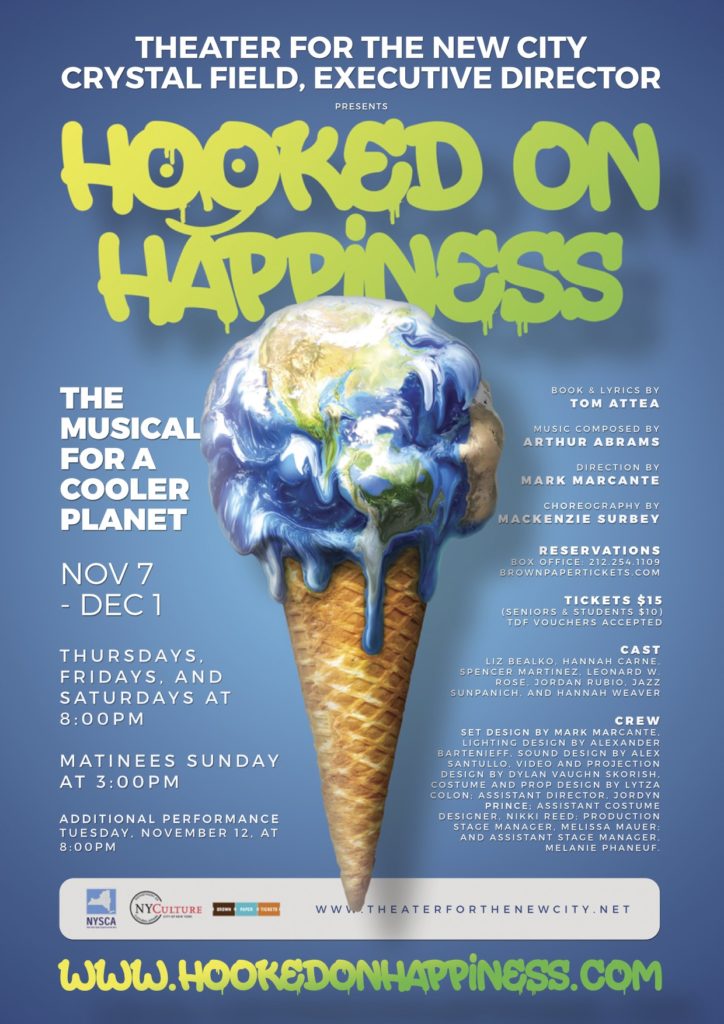 The Musical for a Cooler Planet

HOOKED ON HAPPINESS spotlights a high-school drama class that decides to create their own original musical about climate change, instead of selecting from the musical and play their drama teacher has suggested. Many of their parents are very conservative, and the often frank, passionate content of their lyrics outrages many members of the audience.

Concerned they may not have a future, a high school drama class forgoes staging a classic musical or play as their senior-class production in order to do a show about the global climate crisis. They want to join their voices with other young people across the globe to confront the threat our warming climate poses to their future. As one of them says, “If 16-year-old Greta Thunberg could sail across the Atlantic to demonstrate against climate change, we should at least be able to do a show about it.”

When their drama teacher sees some of the material they’ve written – about parents being hooked on misery, glued to the news and, in the case of the parents who are Fundamentalist Christians, just waiting for the so-called End Times, she decides to let them go ahead with it. They pull no punches in their lyrics, and the parents who are outraged begin calling for the show to be shut down and the drama teacher to be fired. In response, the students threaten to go on strike.

Tom Attea (Playwright). Hooked on Happiness is the 16th produced show that Tom has written, beginning with Brief Chronicles of the Time, which was presented as a showcase by The Actors Studio, where he was a member of The Playwrights Unit for 10 years. Since then, he has written three plays and the book and lyrics for 11 musicals that have been presented by Theater for the New City. Two of the musicals, Heather Smiley for President and Abstinence, are published by Rebel Belle Publishing. StageAgent.com, “The leading resource for theater artists,” has posted selections from a number of his works and has recently decided to post selections from all of them, including Hooked on Happiness. Tom received a TNC/Jerome Foundation emerging playwright grant and is a member of The Dramatists Guild. He is a published poet. To learn more about him, visit his website at tomattea-playwright.com.

Mark Marcante (Director/Set Design) has directed and designed sets for plays and musicals in the US and Europe. He directed Rizzante Returns From the War, Benny’s Barber Shop, Promises Best Kept, British Music Hall, Strangely Wonderful and One Director Against His Cast, written by Crystal Field, which premiered in Italy. This is the 15th show he has collaborated on with Tom Attea and Arthur Abrams. His set designs include the OBIE Award-winning Heathen Valley by Romulus Linney and Hiroshima by Ron Destro and Yoko Ono, which received a Kennedy Center award. Nominated twice for an AUDELCO Award, he was the theatrical and technical consultant for the Arts Connection. Mr. Marcante studied and performed Commedia Dell’arte with Alessandro Bressanello and Michael Conenna from the T.A.G Theatre of Venice.

Arthur Abrams (Composer) began his frequent collaboration with Tom Attea at The Actors Studio. His last four collaborations with Tom were the musicals America’s Favorite Newscaster, An American Worker, Heather Smiley for President, and The Folk Singer. Mr. Abrams wrote the score for the ballet The Velveteen Rabbit and the musical The Open Gate. He also composed and directed music for the Yiddish Theater documentary film The Golden Age of Second Avenue, often shown on Public TV. He has been honored with numerous awards, including a DAAD music fellowship to Mannheim, Germany, a scholarship to the Orff Institute at the Mozarteum in Salzburg, Austria, and a Meet the Composer grant for the score of The Golden Bear. He is a member of The Dramatists Guild.