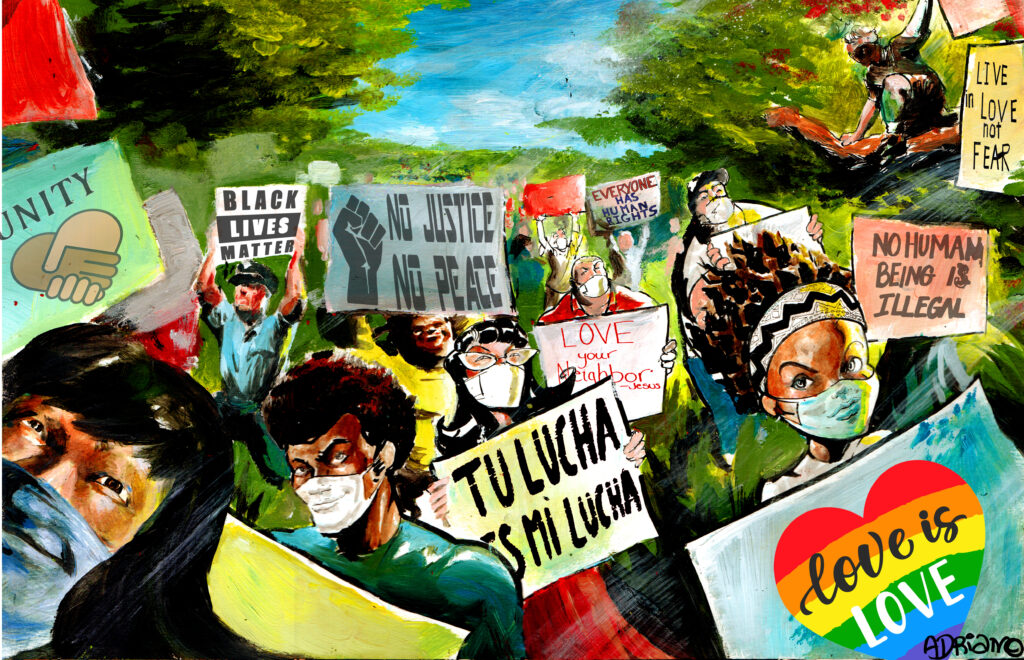 LIBERTY Or JUST US, A City Parks Story

“LIBERTY Or JUST US, A City Park Story” is an oratorio that honors New York City parks for being sites of activism for many 20th and 21st century progressive causes, from the Triangle Shirtwaist protests to Occupy Wall Street. It revisits these movements through the eyes of a contemporary Parks Manager in songs featuring him and the multi-ethnic, multi-abled ensemble. The piece celebrates the idea that the USA can be a country of all its people, that moral aspiration can be reinvented to harness energy to overcome our problems, and that our vision can focus on dignity rather than power, equality rather than wealth and solidarity rather than competition. The audience is invited to sing along, both in new songs and in new lyrics for old tunes.
TNC’s Street Theater productions are always a bouncy joyride through the undulations of the body politic, with astute commentary couched in satire and song. They are delightfully suited for family entertainment, since complex social issues are often presented through children’s allegories, with children and neighborhood people as the heroes.
Since outdoor performance permits are not being given at this time, Theater for the New City has adapted its 2020 Street Theater tour to the virtual space. The theater will live stream its new production, “LIBERTY Or JUST US, A City Park Story”from August 1 to September 13. The piece is an oratorio written and directed by Crystal Field and composed by Joseph Vernon Banks. Its playing schedule will be Saturdays and Sundays at 2:00 PM plus Friday, August 14 at 7:00 PM. Each performance will pay tribute to the park, playground or neighborhood street it was originally scheduled for. (See complete schedule below.)
If Phase 4 regulations change, the production is fully prepared to shift to live outdoor performances on the same schedule, with social distancing and occupancy limits strictly enforced.
Audiences will be able to view the performance on the theater’s website (www.theaterforthenewcity.net) and its Facebook page (https://www.facebook.com/theaterforthenewcity/). These live performances, with the performers “zooming” in from their residences, are designed to create the feeling of performing outside and holding a large, non-captive audience.

Author/director Crystal Field began writing street theater in 1968 as a member of Theater of the Living Arts in Philadelphia. She wrote and performed her own outdoor theater pieces against the Vietnam War and also curated and performed many poetry programs for the Philadelphia Public Schools. There she found tremendous enthusiasm and comprehension on the part of poor and minority students for both modern and classical poetry when presented in a context of relevancy to current issues. She realized that for poetry to find its true audience, the bonds of authoritarian criticism must and can be transcended. Her earliest New York street productions were playlets written in Philadelphia and performed on the flatbed truck of Bread and Puppet Theater in Central Park. Peter Schumann, director of that troupe, was her first NY artistic supporter.

In 1971, Ms. Field became a protégé of Robert Nichols, founder of the Judson Poets Theater in Manhattan, and of Peter Schuman, founder of Bread and Puppet Theater. It is an interesting historic note that “The Expressway” by Robert Nichols, directed by Crystal Field (a Street theater satire about Robert Moses’ plan for a throughway to run across Little Italy from the West Side Highway to the FDR Drive) was actually the first production of Joseph Papp’s New York Shakespeare Festival. Nichols wrote street theater plays for TNC in its early years, but as time went on, wrote scenarios and only the first lines of songs, leaving Field to “fill in the blanks.” When Nichols announced his retirement to Vermont in 1975, he urged Field to “write your own.” The undertaking, while stressful at first, became the impetus for her to express her own topical political philosophy and to immerse her plays in that special brand of humor referred to often as “that brainy slapstick.” Her first complete work was “Mama Liberty’s Bicentennial Party” (1976), in honor of the 200th anniversary of the American Revolution.

Field has an associate’s degree in Dance from Juilliard and a BA in Philosophy form Hunter College.

TNC Street Theater’s leading actor is and has been Michael David Gordon, a teacher and performer with Irondale Theatre Company who is also bandleader of a performance group which performs classic rock in the subways.

Field has written and directed a completely new opera for the TNC Street Theater company each successive year. She collaborated for eleven years with composer Mark Hardwick, whose “Pump Boys and Dinettes” and “Oil City Symphony” were inspired by his street theater work with Ms. Field. At the time of his death from AIDS in 1994, he was writing a clown musical with Field called “On the Road,” which was never finished. One long-running actor in TNC street theater was Tim Robbins, who was a member of the company for six years in the 1980s, from age twelve to 18.

Field has also written for TNC’s annual Halloween Ball and for an annual Yuletime pageant that was performed outdoors for 2,000 children on the Saturday before Christmas. She has written two full-length indoor plays, “Upstate” and “One Director Against His Cast.” She is Executive Director of TNC.

Composer Joseph-Vernon Banks has written original music for the TNC street theater productions  “No Brainer or the Solution to Parasites,” “SHAME! Or The Doomsday Machine,” “Checks and Balances, or Bottoms Up!,” “Teach it Right, or Right to Teach,” “EMERGENCY!!! or The World Takes A Selfie,” “99% “Reduced Fat, or, You Can Bank On Us,” “Bamboozled, or the Real Reality Show,” “Tap Dance,” “State Of The Union,” “The Patients Are Running The Asylum,” “Bio-Tech,” “Code Orange: on the M15,” “Social Insecurity,” “Buckle My Shoe” and “Gone Fission: Alternative Power” all with book and lyrics by Crystal Field. His other TNC productions include music and lyrics for “Life’s Too Short To Cry” by Michael Vazquez. His awards include a Meet The Composer Grant, the ASCAP Special Awards Program, and a fellowship from the Tisch Graduate Musical Theater Writing Program at NYU. His musical “Girlfriends!” premiered at The Goodspeed Opera House. He has been a composer–in-residence in The Tribeca Performing Arts Center Work and Show Series and is a member of The Dramatists Guild.