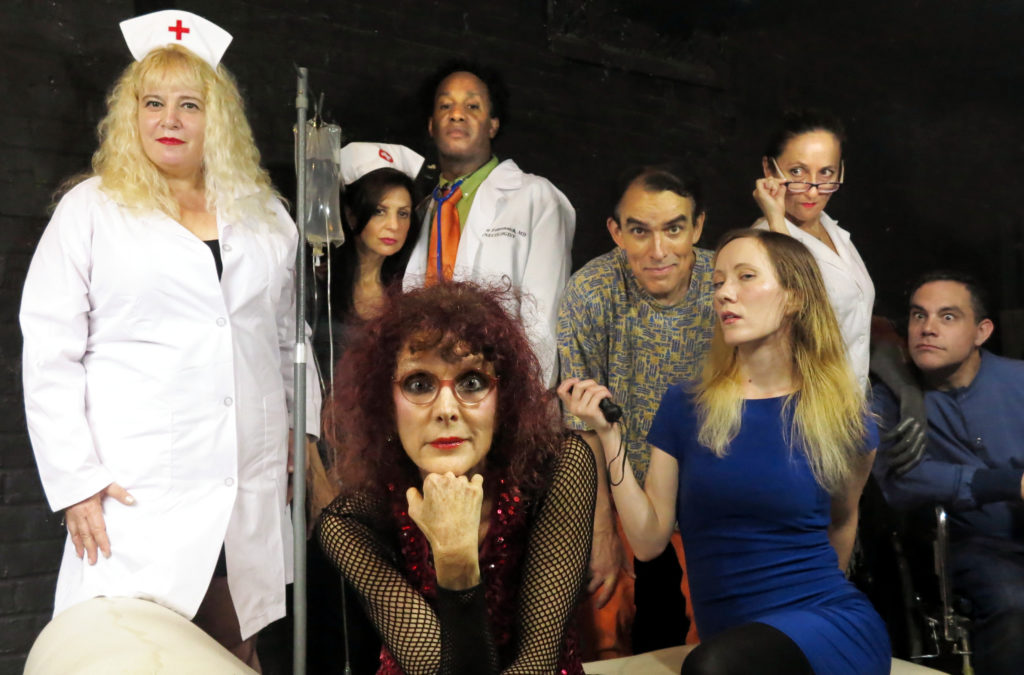 Sometimes a trip to the Emergency Room is so awful that it’s just made for Theater of the Ridiculous. That’s the premise of “Singin’ in the E.R.,” the newest musical by Ruby Lynn Reyner, a star of John Vaccaro’s Playhouse of the Ridiculous who has been called a female Jerry Lewis. The piece is inspired by ordeals in a New York City hospital suffered by the author and her husband. Now she believes that the only way to deal with such life-changing experiences is through unrestrained, exorbitant laughter. Theater for the New City will present the musical’s world premiere run September 26 to October 13, directed by and starring its author.

The play was written from actual experiences, but they are transformed with outrageous satire. The setting is a fictional hospital in the dark world of medical mishaps. A variety of songs, all in rock ‘n roll style, are nestled among outrageous scenes with such mind-bending events as arms falling off, crashes with the crash cart and fitting a woman’s ass to a sling. One of the songs, “Biggest Balls in Town,” was written by Reyner and the late Jackie Curtiss; the others are by Reyner alone.

Theater of the Ridiculous was born when two masterpieces by Ron Tavel (“Kitchenette” and “Life of Juanita Castro”), drafted as scenarios for Andy Warhol’s Film Factory, found their way to the stage in 1965 when Warhol suggested that Tavel try them out as theater. This idea led to the birth of a genre to be named Theater of the Ridiculous, whose one-sentence manifesto, penned by Tavel, declared “We have passed beyond the Absurd, our position is totally Ridiculous!” A movement was formed which eventually split into three directions: Ronald Tavel’s plays, directed by his brother Harvey, many presented at Theatre of the Lost Continent in the Jane West Hotel; the productions of director John Vaccarro (who staged plays by Tavel, Rosalyn Drexler and Charles Ludlam) and The Ridiculous Theatrical Group, which enjoyed a long run of Ludlam’s plays in the Sheridan Square Playhouse during the 1990s under the leadership of Everett Quinton. With cross-gender casting and drag queens as actors as two of its signature elements, Theater of the Ridiculous is now seen as the progenitor of glam rock and the Rocky Horror cult.