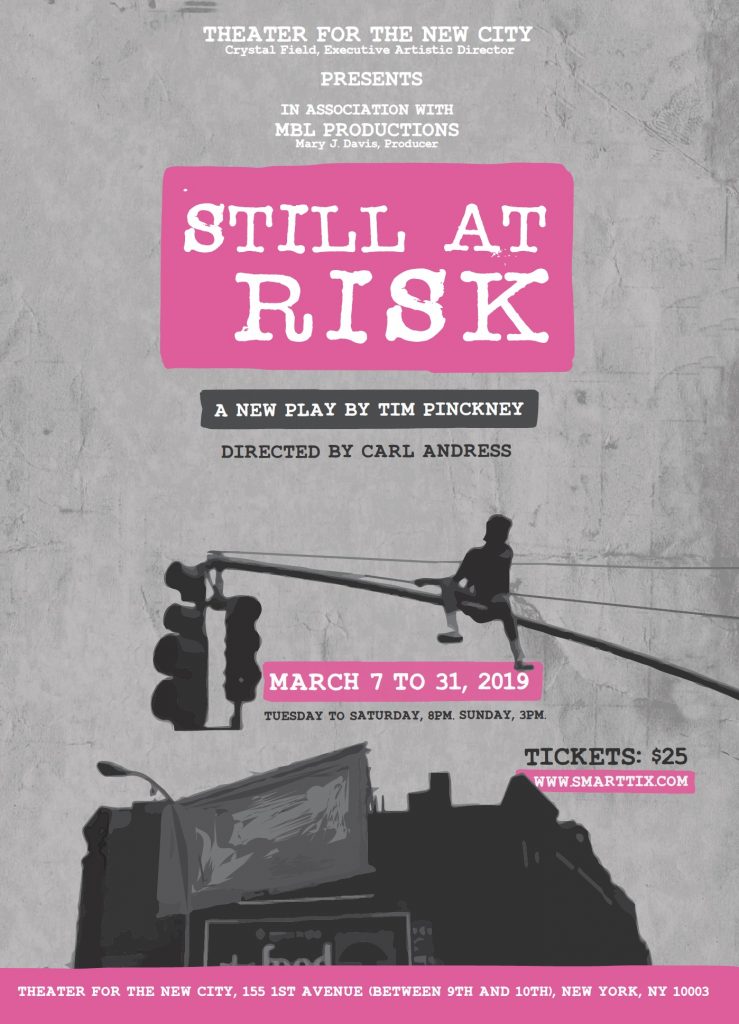 STILL AT RISK
A New Play By
TIM PINCKNEY

About STILL AT RISK

Kevin, a surviving activist from the front lines of the AIDS crisis, finds himself struggling to find his place and purpose in contemporary gay culture. When a gay fundraising event threatens to erase the history he was part of creating, Kevin’s anger and passion are renewed and he is confronted with the challenge of how to motivate change in this new climate of visibility. Along the way, Kevin’s raw and slightly unhinged methods provoke everyone who can help him, damage long friendships and eventually expose some dark secrets.

Hilarious, sharp, and deeply moving, Still at Risk is a powerful look at the personal and political hazards of rewriting the past and one man’s attempt to move forward.

Please note that STILL AT RISK is dark on Mondays. Tuesdays and Wednesdays play at 7 PM and Sundays play at 3 PM

Please note that STILL AT RISK will be performed with one 10-minute intermission.

TIM PINCKNEY (Playwright) Tim Pinckney started writing plays after ten years as a working actor. His first play, Message to Michael, was produced by Rattlestick Playwrights Theatre in New York City where it enjoyed an extended run, leading to a series of successful regional productions. Still at Risk recently had its acclaimed world premiere at the New Conservatory Theatre Center in San Francisco (Ed Decker, Artistic Director). His play Ever So Humble had its premiere at The Hangar Theatre starring Andréa Burns and Eric T. Miller, directed by Peter Flynn. Other plays include A Perfect Blendship (Workshopped at the Hangar Theatre), First Refusal (Workshopped at Rattlestick Playwrights Theatre), Stir until Smooth (Stable Cable Company) and his latest, A Prehistoric Ritual. Tim wrote the acclaimed stage adaptation for the world premiere of Mr. Magoo’s Christmas Carol at the Gerald Lynch Theatre in New York City, starring Douglas Sills, Joshua Henry and Betsy Wolfe, directed by Carl Andress. He has also adapted four classic musicals – Hair, On the Twentieth Century, Chess, and Funny Girl – for The Actors Fund’s concert series. Tim has traveled all over the map as a contributing writer to Passport Magazine. He was personally selected by Fred Ebb to write the liner notes for the triple platinum Special Limited Edition CD/DVD soundtrack recording of the Oscar®-winning motion picture Chicago. Tim proudly serves on the advisory board of The Fred Ebb Foundation. Originally from Auburn, New York, Tim is a proud member of The Dramatists Guild. Tim is represented by Charles Kopelman at Abrams Artists. www.timpinckney.com

CARL ANDRESS (Director) Carl is delighted to be back at Theater for the New City! His directing credits include critically acclaimed world premieres written by and starring Charles Busch including, The Divine Sister, The Tribute Artist, Shanghai Moon, The Third Story, Judith of Bethulia, Cleopatra and the New York premiere of Die, Mommie, Die! Additional credits include Carmen Pelaez’s FAKE and Rum & Coke, Douglas Carter Beane’s The Cartells, Joe Godfrey’s Romance Language, the world premiere of Who’s Holiday! at the Westside Theater, regional productions of My Fair Lady, Paul Rudnick’s I Hate Hamlet, as well as The Tale of the Allergist’s Wife and Crush the Infamous Thing at the Coconut Grove Playhouse. Carl staged the NY concert premieres of The Visit, A Wonderful Life, Mr. Magoo’s Christmas Carol, Hollywood Nurses and Valley of the Dolls to benefit The Actors Fund, as well as productions of Tenderloin, Harold & Maude, I Love My Wife and The Mad Show for the York Theatre’s “Musicals in Mufti,” and Here’s to the Girls! and Being Comden & Green for the 92Y’s “Lyrics and Lyricists.” carlandress.com