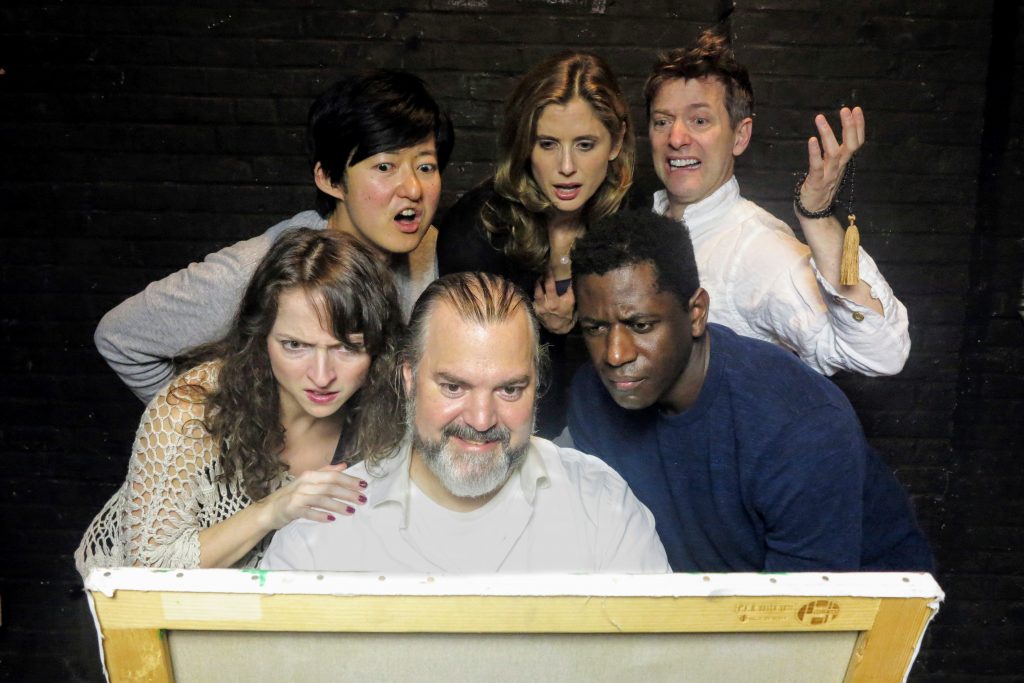 In the wake of 9/11, Bruno abandons his lucrative Wall Street career to pursue his lifelong dream of becoming a painter. After years of struggling, he finally books a once in a lifetime project, only to develop major misgivings about participating and completing his painting. As his vacillations increase, hysteria and hilarity ensue. Can a marriage-minded girlfriend, greedy guru, financial folly, and one bitchy boss change Bruno’s mind?

A ten-minute excerpt of the play was performed in Theater for the New City’s Lower East Side Festival of the Arts last season.

The actors are Brad Fryman as Bruno, Dai Ishiguro as Kim, Alexandra Bonesho as Denise, John Gazzale as Chang, Sean Phillips as Hal and Elizabeth Inghram as Rachel.

Natalie Menna (http://nataliemenna.com) is the author of “Occasionally Nothing,” which was presented by Theater for the New City’s 2018 Dream Up Festival, and “Committed,” which was performed in 2017 at the 14th Street Y. She is a resident playwright of August Strindberg Rep, for which she adapted “Journey in Light and Shadow” by Stig Dalager for a 2017 production at Gene Frankel Theatre. Last season, August Strindberg Rep presented her “#MeThree,” an evening of three original short one-acts, at Gene Frankel Theatre. Her play “Roberta!” was presented twice at the United Solo Festival. Her plays “Roberta!,” “I-POD” and “Zen A.M.” have been published by indietheaternow.com. She is also an actor.

This production of “Zen A.M.” is produced, presented and funded by Theater for the New City. In 2020, Menna’s play, “Committed,” directed by Austin Pendleton, will be produced, presented and funded by TNC. Ms. Menna writes, “Crystal Field’s support of playwrights is a dazzling example to the theater world of a devoted artistic director. Her insight, wisdom, and discernment are matched only by her generosity. Under her leadership, TNC has maintained its position as a premier presenter of daring theater. My gratitude to Crystal has no bounds!”