Bread and Puppet requires the audience to wear masks for all performances.

In Ophelia, the mysterious Ophelia is not an attachment to Hamlet, but the center around which all other elements spin,
death, ghost, king, and population, all of them puppets, cardboard giants or dwarves. Only Ophelia is real, played by director Peter Schumann’s grandson and frequent B&P collaborator, 13-year-old Ira Karp. 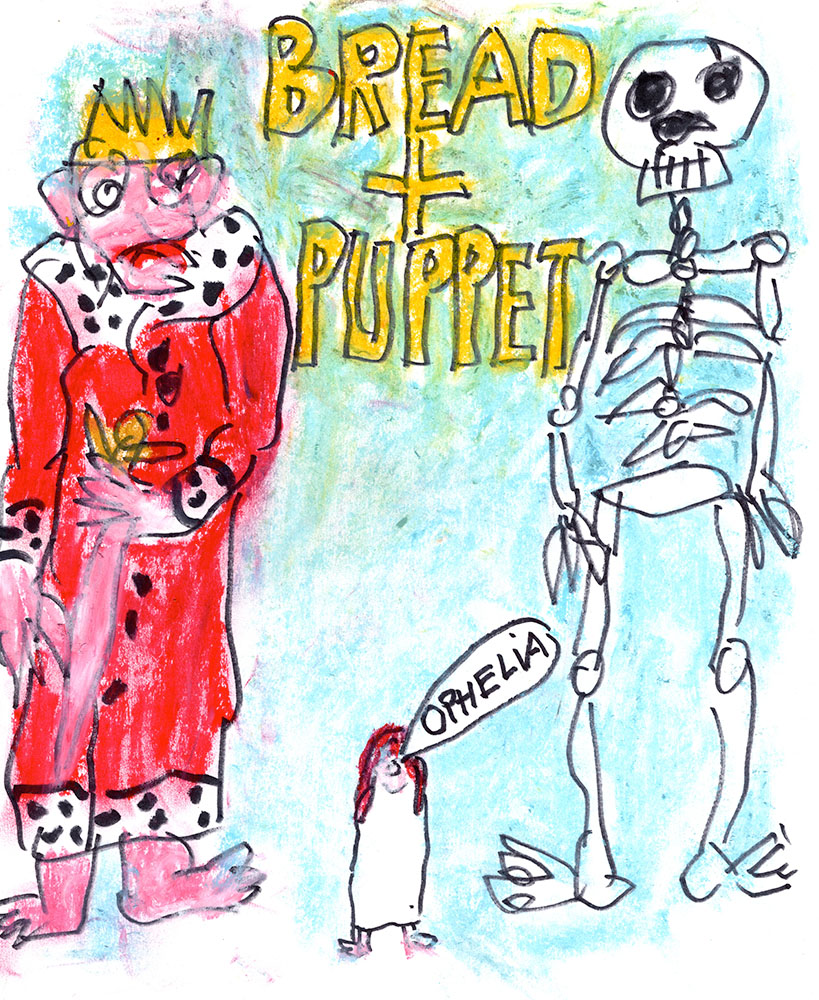 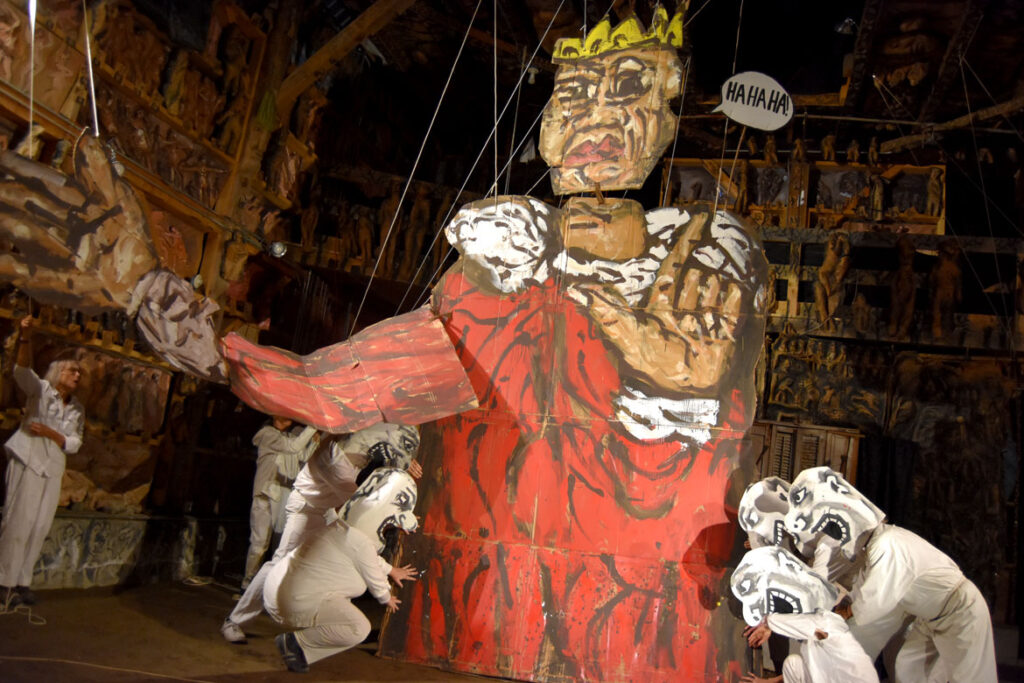 The following week Bread & Puppet will present The Apocalypse Defiance Circus, a rollicking spectacle of protest and celebration. The 60-minute show addresses the heart of the current moment with a bright barrage of acts spanning many moods, from slapstick to the sublime, all powered by a riotous brass band. Help is provided by stilt-dancers, blue horses, paper maché clouds and tigers. Building on the tradition of the Circus as spectacle for the people, performed in the round, and somehow encompassing the ecstasy, sadness and absurdity of the world as a whole, Bread & Puppet’s circuses have become an iconic form in their own right, 51 years running!
After each show, Bread & Puppet will serve its famous sourdough rye bread with aioli, and Bread & Puppet’s “Cheap Art” – books, posters, postcards, pamphlets and banners from the Bread & Puppet Press – will be for sale. 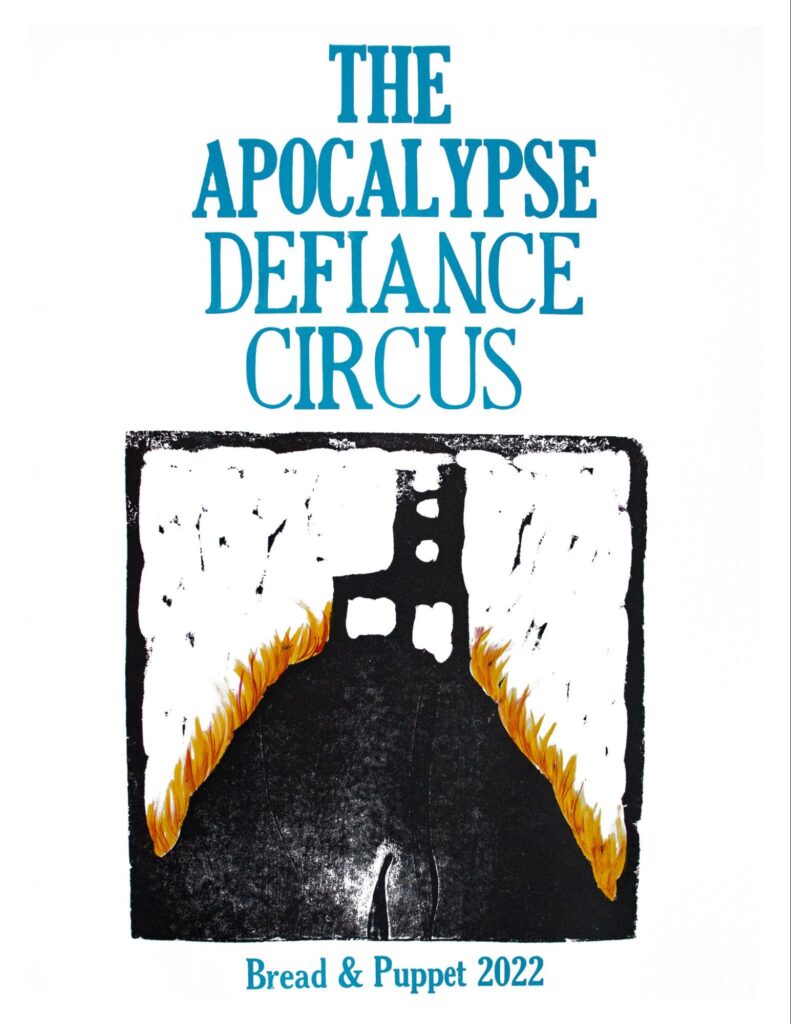 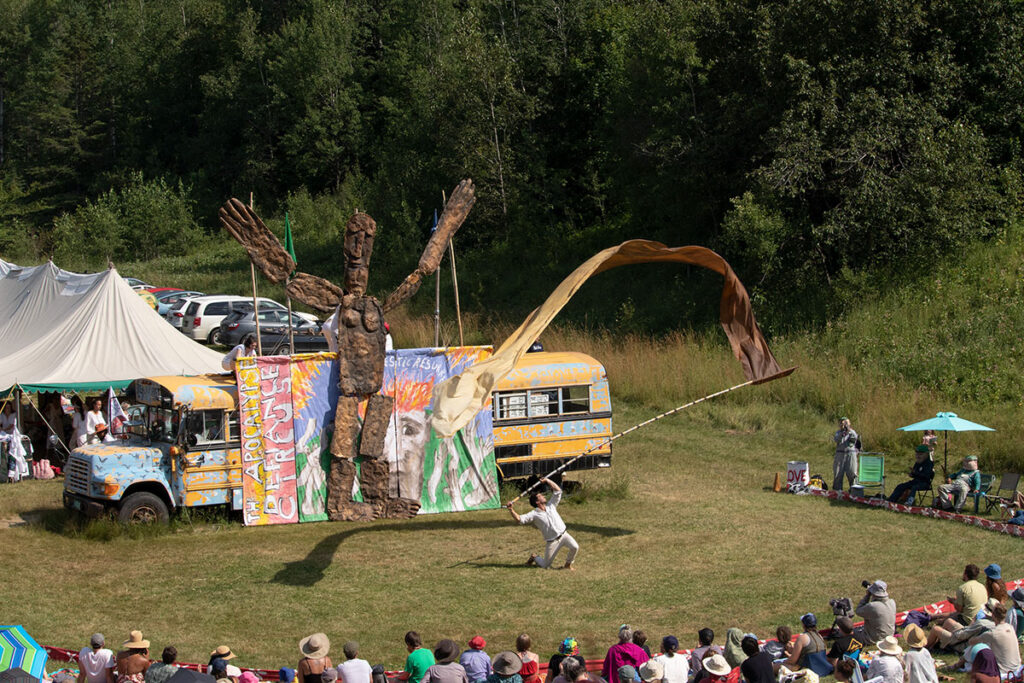 BREAD AND PUPPET THEATER
The Bread & Puppet Theater is an internationally celebrated company that champions a visually rich, street-theater brand of performance art filled with music, dance and slapstick. Believing that theater is a basic necessity like bread, the company frequently brings its work to the streets for those who may not otherwise go to the theater. Its shows are political and spectacular, with puppets often on stilts, wearing huge masks with expressive faces, singing, dancing and playing music.
Bread & Puppet is recognized throughout the world and has won distinction at festivals in Italy, Poland, Colombia, and Yugoslavia, beginning with their break-out performances at the 1968 Nancy Festival in France. Notable awards include the Erasmus Prize of Amsterdam, 4 Obies, the Puppeteers of America’s President Award, and the Vermont Governor’s Award. Bread and Puppet regularly tours Europe, Canada, and the United States and has recently visited El Salvador, Haiti, Russia, and Korea.
Founded in 1963 by Peter Schumann on New York City’s Lower East Side, the theater has been based in the North East Kingdom of Vermont since the early 1970s and is one of the oldest, nonprofit, self-supporting theater companies in the country.

COVID Protocol:
As of September 26th, 2022, we are no longer requiring proof of COVID-19 vaccination for our audience upon entry.
Bread and Puppet requires the audience to wear masks for all performances.