Director/translator Robert Greer will set Ibsen’s “Hedda Gabler” in 1981 Norway for the world premiere of his modern translation of the play. The adaptation offers an innovative re-imagining of the academic rivalry between George Tesman and Eilert Lovborg and re-conceives the character of Hedda as a 1980’s socialite.

In Ibsen’s 1891 play, George Tesman is pitching himself for a professorship in the field of History of Science & Technology on the merits of his massive volume, “Brabant: Medieval Technologies and their Socio-economic Implications.”  In Greer’s adaptation, Tesman’s work retains this dusty focus.  However, Tesman’s perennial academic rival, Eilert Lovborg, is about to come out with a much snazzier tome, predicting from contemporary scientific developments that personal computers will soon be found beside each fireplace and a network will imminently span the globe.  Tesman and Lovborg  are competing for the same professorial chair.

Tesman is living above his means: his young wife, Hedda, daughter of a general, is dangerously bored.  She wants luxury but has no funds of her own.  Meddlesome by nature, she has found herself with an odd psychic power over both Loyborg and his platonic helpmate, Thea.  So Hedda is primed to eliminate her husband’s rival and ensure Tesman’s professorship, thus securing her own financial security.  She manipulates Lovborg into a relapse of his alcoholism, during which he loses his paper’s typescript.  It falls into Hedda’s clutches and she burns it in her fireplace.  The loss of his life’s greatest work renders Lovborg suicidal.  Hedda’s plot would be complete, except that the lascivious Judge Brack, someone even more diabolical than she, desires her and guesses she has provided one of her father’s two pistols to Lovborg for his intended suicide.  Hedda uses the other pistol on herself to escape Brack’s trap.

In Greer’s approach, the play is less a demonstration of the 19th century notion of the “new woman” and more a lesson on the destructiveness of professional competition.  Essential elements are totally preserved while the dialogue is updated to modern parlance to support the modernity of Ibsen’s themes.  Henrik Ibsen is now considered the father of modern drama.  The principal characters will change recognizably in the diction of their roles.  Tesman and Lovborg will speak in the professorial tone of modern academics.  Hedda will speak in the cashmere-soft vowels of a modern socialite. 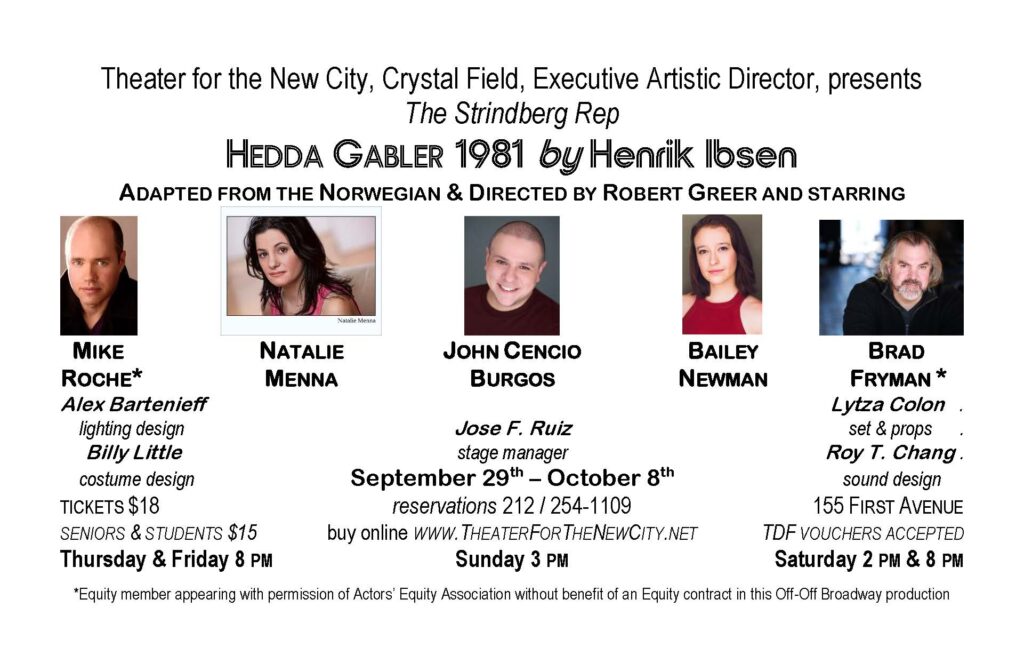 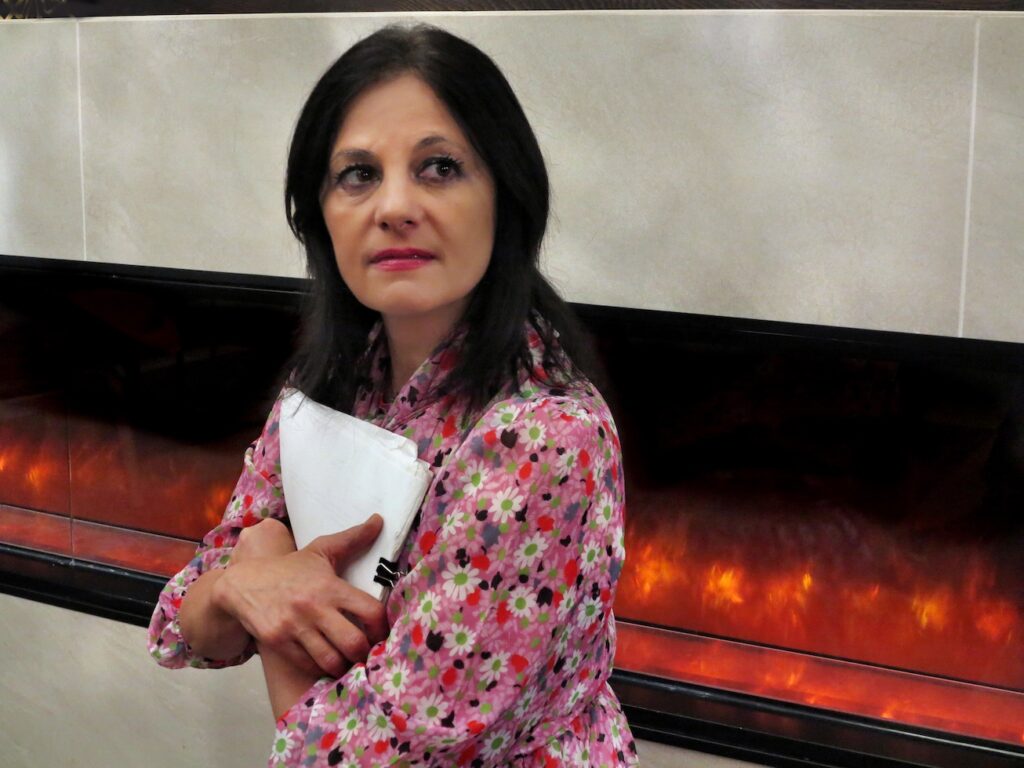 Natalie Menna (Hedda) has appeared at Theater for the New City in lead roles in four Strindberg plays: Elise in the world premiere of “Pelican/Isle of the Dead,” Laura in “The Father,” Tekla in “Creditors” and Alice  in “Dance of Death, Parts 1 &2,” all in new translations by Robert Greer.  Menna is also a playwright.  Her absurdist play, “Occasionally Nothing,” was presented at TNC last season. She is also author of “Committed,” which will be presented by TNC in January, and a resident playwright of August Strindberg Rep, for which she adapted “Journey in Light and Shadow” by modern Danish playwright Stig Dalager.  Her other plays include “Zen A.M.” (TNC, 2019) and a variety of prize-winning short plays.

August Strindberg Repertory Theatre, under the direction of Robert Greer, is committed to productions of Nordic plays in new translations and interpretations that illuminate the works for today’s American audience. This writing has had helped to make the transition from kitchen and keyhole drama to poetic theater. That is why TNC has taken this repertory into its family.  Mr. Greer writes, “The Strindberg Rep is deeply grateful to Crystal Field for having made us a resident company. Crystal’s support of new plays (and plays newly translated) has been a godsend to us. Her knowledge and experience of theater is a beacon guiding us and her unflagging devotion to the art of the drama and its artists is a role model for leaders of all cultural institutions.”

COVID Protocol:
As of September 12, 2022, all guests ages 5 and and older are required to show proof they have received at least one dose of a COVID-19 vaccine authorized for emergency use by the FDA or WHO.

All patrons must be vaccinated in order to see shows. Please provide proof of vaccination before picking up tickets.

Wearing of masks is suggested in the lobby, restrooms and performance spaces at Theater for the New City, but they are not required.