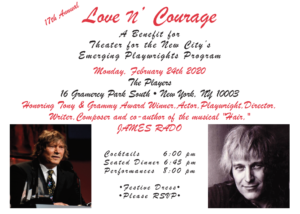 Theater for the New City (TNC) is a four-theater complex at 155 First Avenue. Its awards include the Pulitzer Prize, 43 Village Voice OBIE Awards, eight Audelco Awards, two Bessie Awards, five ASCAP Awards, 10 Rockefeller Playwrights Fellowships, The Mayors Stop the Violence Award, the Manhattan Borough President’s Award for Public Service and Artistic Excellence in Theater, and a NY City Council Proclamation that pays tribute to TNC’s contributions to improving the quality of life in the City by its “rich tradition of bringing theater to people in multi-cultural neighborhoods.”

The Emerging Playwrights program is integral to the theater’s mission, which includes being a center for new and innovative theater arts, discovering relevant new writing and nurturing new playwrights. TNC does not believe that readings are enough help for an artist to grow into the American playwriting mainstream. So the theater gives emerging artists full productions, with a minimal run of three weeks, full lighting, sets, costumes and overall good production values. The theater staff does marketing to make sure they have audiences, and ticket prices are kept low to ensure good attendance.

Playwrights are selected for the quality of their work and their historical and social vision. Executive Director Crystal Field declares, “That is our ballast. Everything else is just decoration.” Many colleges have playwriting programs, but the process at TNC is different from what happens in university theaters because at TNC, the playwright is involved in all aspects of the production and has final say on everything including budget, casting, designers and choice of director. The producer cannot fire the writer and there is no censorship in any way. It’s a nurturing relationship in which the author is also invited to create a new work for the following season.

Emerging playwright productions get to use the theater’s set and costume shops and its vast inventory of set pieces. Each theater space is fully equipped and this year, TNC has added a projector and sound mixer.

For photos of recent productions of TNC Emerging Playwrights, go to: https://photos.app.goo.gl/iFZw9TF8ztn7McMBA