Lying, stealing, kidnapping, government-manipulating oil ogre Dean captures and moth-balls renewable energy discoveries. Corporate masseuse Summer knows exactly who has skin in the game. When Summer befriends Raymond (a shy uber-geek who can burn sea water) the energy escalates. Will Dean feed Summer to a black hole, in his campaign to promote capitalism by crushing the competition? Will true love prevail in the face of ultimate greed, a chicken-bone fuel generator, and booth babes doing a strip tease where the black hole sucks their clothes off? Find out in this zany satire of energy politics, Black Hole Wedding: a love story with a pure heart, wrapped in a warped world where truth doesn’t matter, integrity doesn’t matter, but golf is essential. 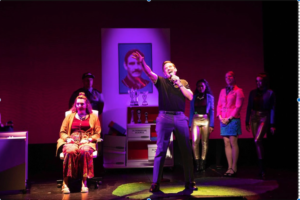 Dominic Frigo (Music Director) is a freelance multi-instrumentalist in New York City. Born and raised in Chicago, he studied music composition, double bass, and piano at Roosevelt University. Having a rich variety of genres and instruments at his disposal, he has enjoyed a career as a performing and recording artist in Chicago and New York. As a singer/songwriter/composer, Dominic was bandleader for avante-garde pop/rock projects Two Aglets Jazzing and Kid, and the MD for the new series Green Room 42 Sings.

Judith Ingber (Olivia) was most recently seen in The Day Before Spring at The York’s Musicals in Mufti Series. Regional credits include: Life Sucks (world premiere), Jill Sobule’s Yentl, and Bus Stop.

Lindsey Lake (Georgina) earned a BFA from The Hartt School of Music, Dance & Theatre. Favorite roles include Mrs. Cohen/Maureen in the National Tour of RENT, Factory Girl/Fantine in Les Miserables (North Shore Music Theatre) and Faith in the Boston production of Respect: A Musical Journey of Women (Stuart Street Playhouse). Thank you to About Artists Agency and a shout out to my MNSTR crew! www.themonstercycle.com. Love to John for his endless support and encouragement. Every single show is for Zoë & Ethan. Never give up on your dreams. Stalk me: @llake

Jonathan Miller (Raymond) is so excited to be a part of this show! Credits include: Little Women (Laurie) and Thoroughly Modern Millie (Jimmy). BFA Musical Theatre, Pace University. @jonathantmiller

Laura Butchy (Dramaturg) is a New York dramaturg, educator, and writer. She has been a dramaturg for numerous NYMF productions, including The Gunfighter Meets His Match, Dorian Gray, Pope!, Somewhere with You, Foreverman, Date of a Lifetime, The Incredibly Deaf Musical, My Illustrious Wasteland, The Hatpin, and The Yellow Wood. Other credits include The Vagina Monologues [Queens Theatre], Welcome to the Friendly Tripbox and In Praise of Folly: The Don Quixote Project [Peculiar Works Project]; West Pier [Ohio Theater], and Herakles [Chashama]. She is a professor at Plaza College and has written for American Theatre and other publications.