Critics are invited on or after May 1. Previews April 29.

NEW YORK — From April 29 to May 15, Theater for the New City (TNC) will present “Occasionally Nothing,” a new play written by Natalie Menna.

The near future. The world is nearing its end. In a bizarre bomb shelter, Harry, Clay and Luella, British expats, cope by taunting each other with warped games of verbal wordplay and by blurring each other’s realities while losing touch with their own. A bleak glimpse at life in the dystopic wake of a failed revolution, where war abounds, words have lost their meaning, and people have lost their way. How did the world ever get there?

“No one gets a deathbed anymore.”

This prophetic play that premiered at TNC’s 2018 DreamUp Festival, a crystal ball chronicle of today’s desperate events, that foresaw the disastrous trend toward totalitarian behavior through dictates and mandates is presented in its original 2017 text, unchanged and predicting the desperate events of the past two years. 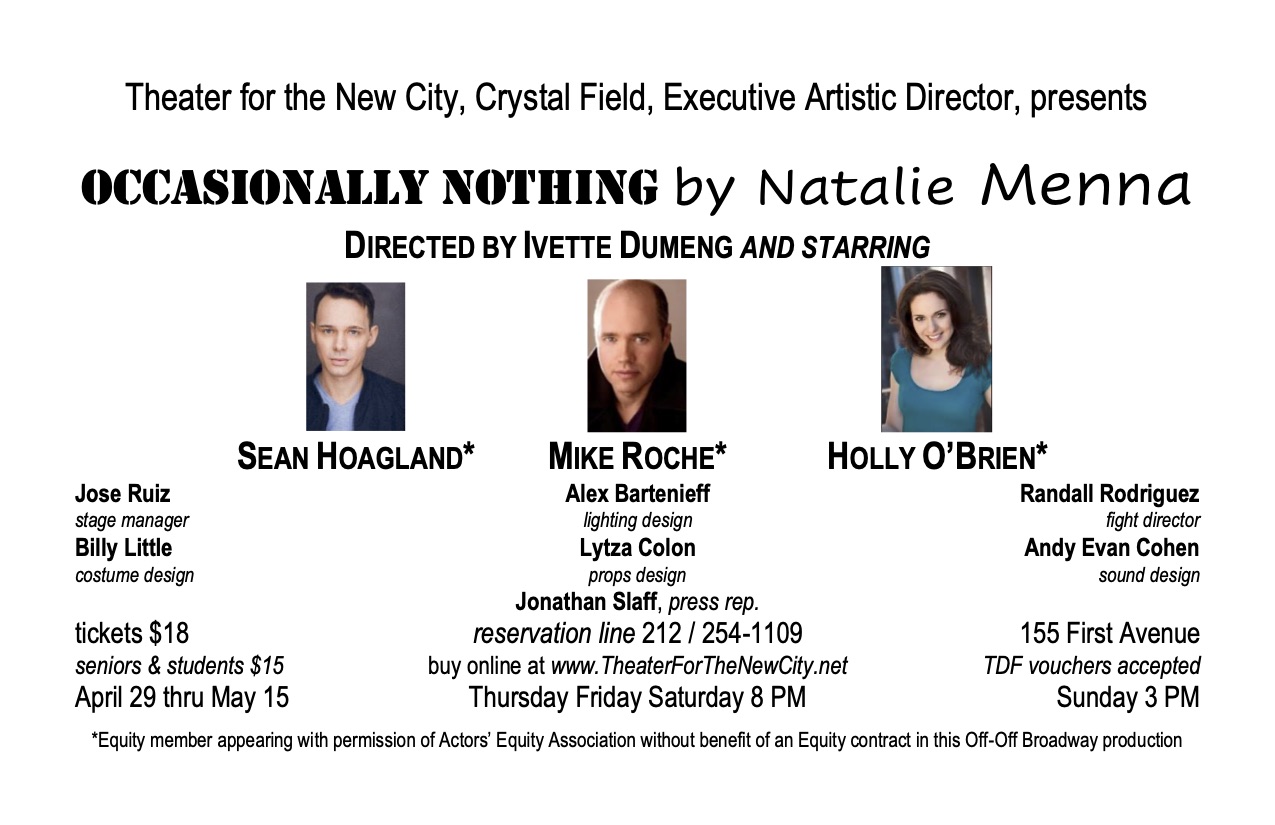 Natalie Menna is an award-winning playwright, actress and nativeNew Yorker. Her play Zen A.M. was presented in 2019 by TNC artistic director Crystal Field — to glowing reviews. Her Committed was performed as a workshop in 2017 at the 14th Street Y to excellent reviews and will premiere at TNC this fall . Occasionally Nothing was previously performed at TNC’s Dream Up Festival 2019. She was nominated for Outstanding Overall Production of a Revival/Adaptation/Sequel for Occasionally Nothing in Planet Connections’ Festivities 2017 and awarded both Outstanding Playwriting and Outstanding Overall Production for the original one-act Occasionally Nothing in 2016’s Festivities. Committed received Outstanding Overall Production of a Reading and Best Actor at 2015’s. Her short plays have been featured at Oberon Theatre Ensemble, Nylon Fusion, Midtown International Theater Festival and United Solo among others. She starred as Alice in the Strindberg Rep production of Dance of Death, Part 1 & 2, earlier this year and previously as Elise in Strindberg’s The Pelican, Laura in The Father and Tekla in Creditors to raves in Broadway World, Thinking Theater NYC, The Reviews Hub, NY Theater Wire, Reviews from Underground, etc. NatalieMenna.com

All patrons must be vaccinated in order to see shows. Please provide proof before purchasing and picking up tickets.