Hamlet in Harlem
Thursday, May 14 at 7PM by Alberto Ferreras, Hosted by John David West

“Hamlet in Harlem” the story of a young writer who holds a table reading to fund his urban adaptation of Shakespeare’s masterpiece. In the process, fiction and reality intertwine creating a politically incorrect comedy that questions media stereotypes, gender roles, cultural appropriation, and the relevance of classic theater. 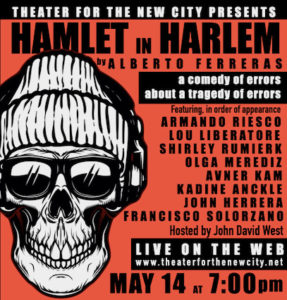 Cast in Order of Appearance: