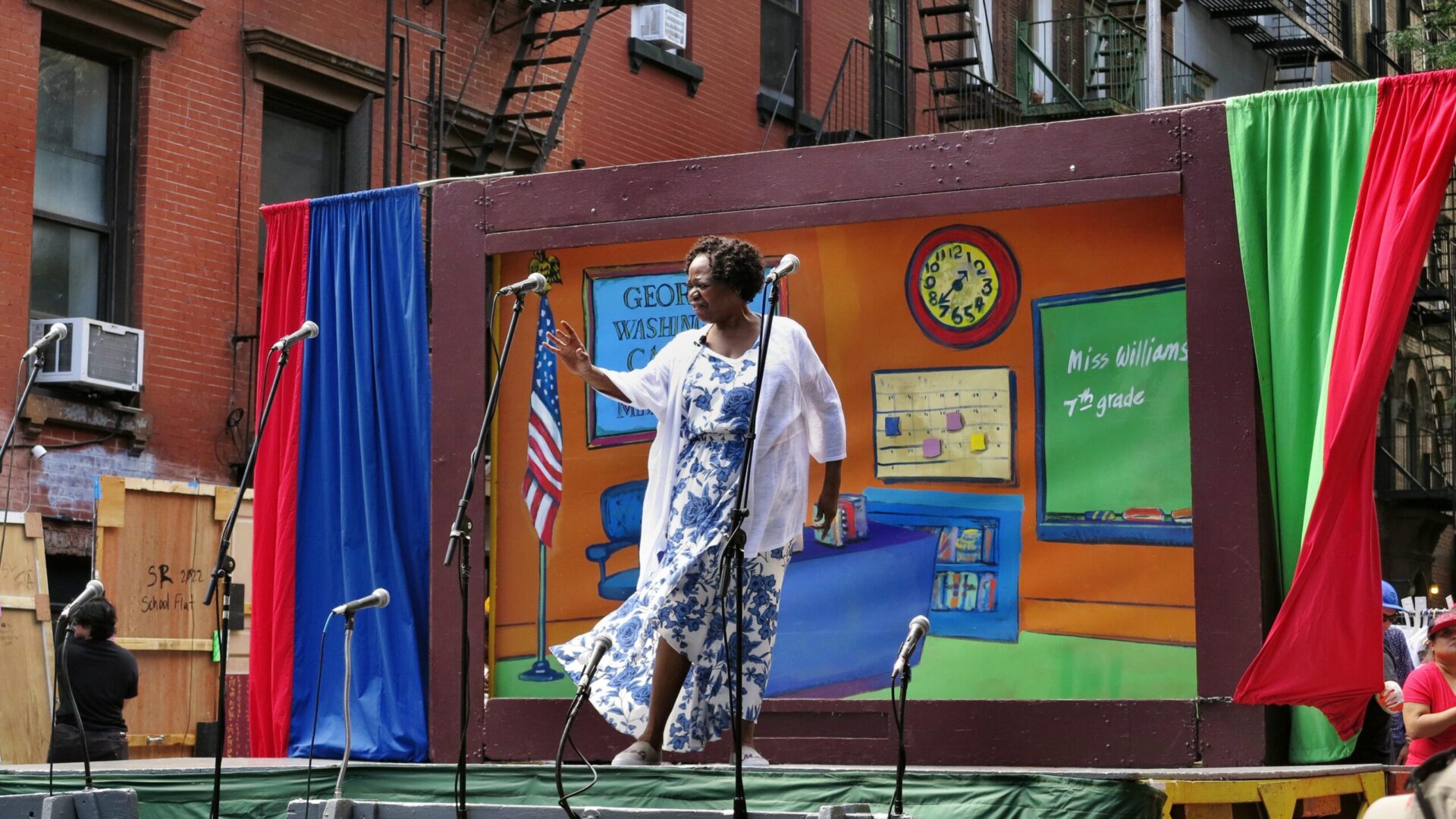 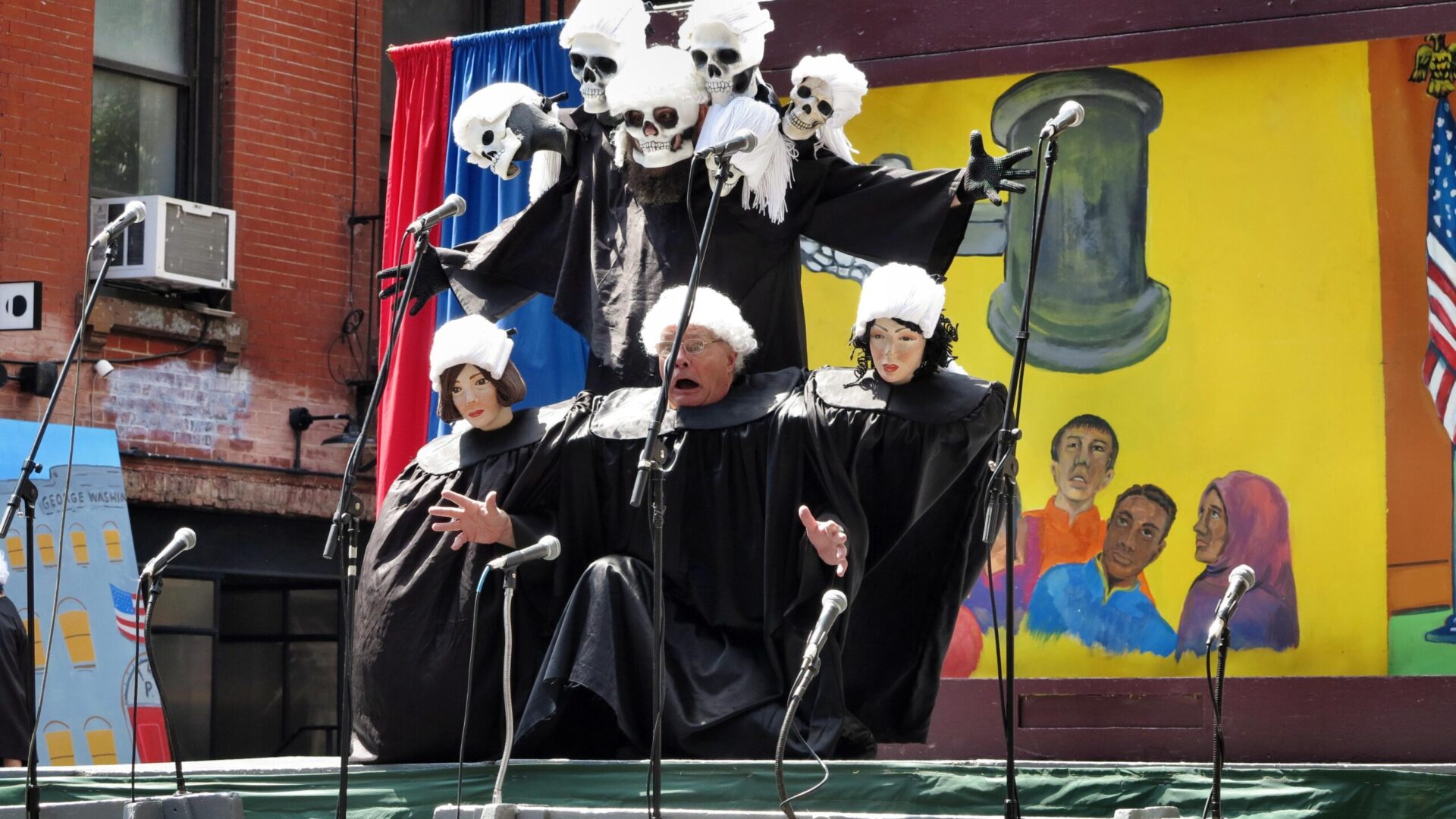 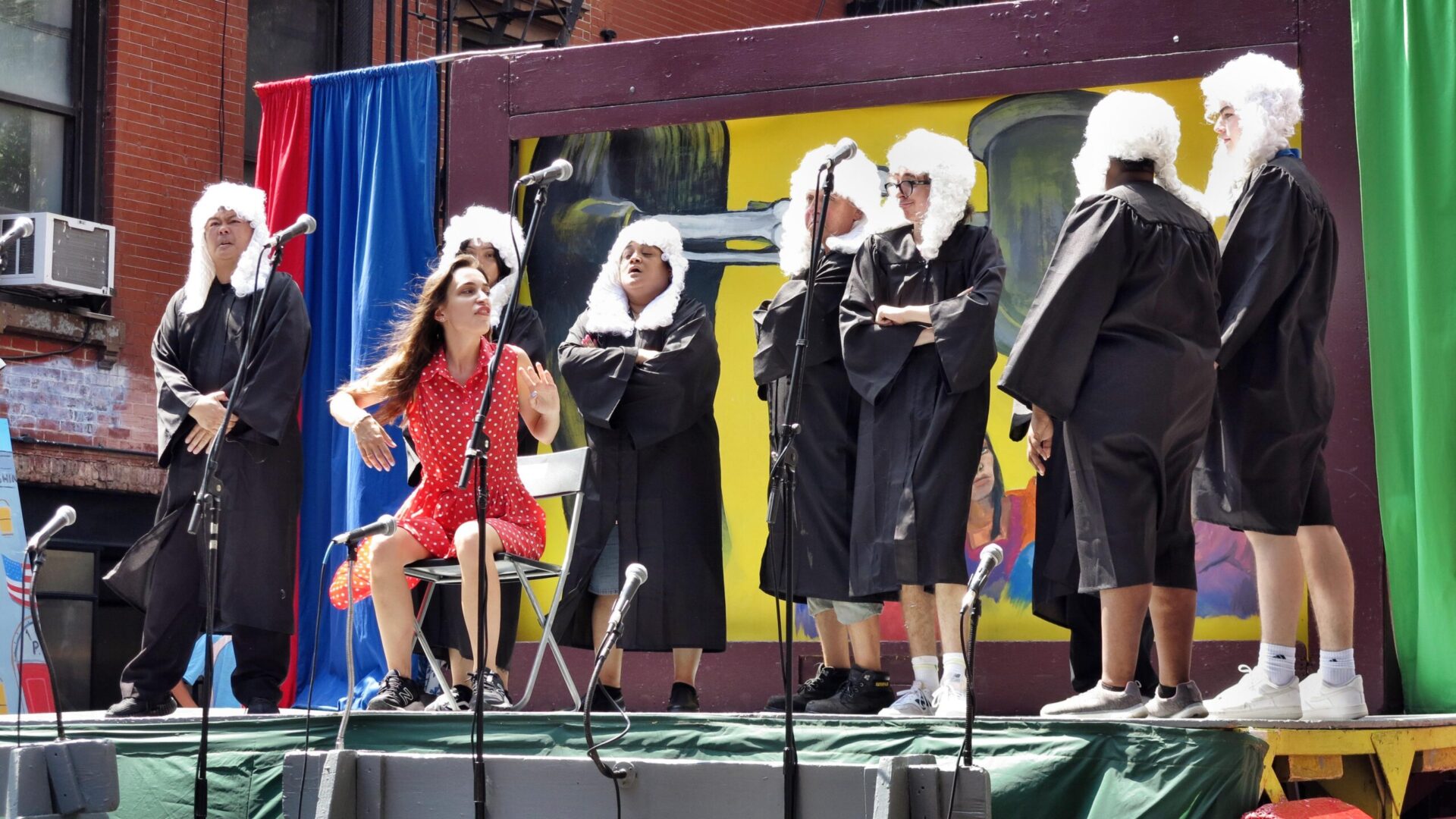 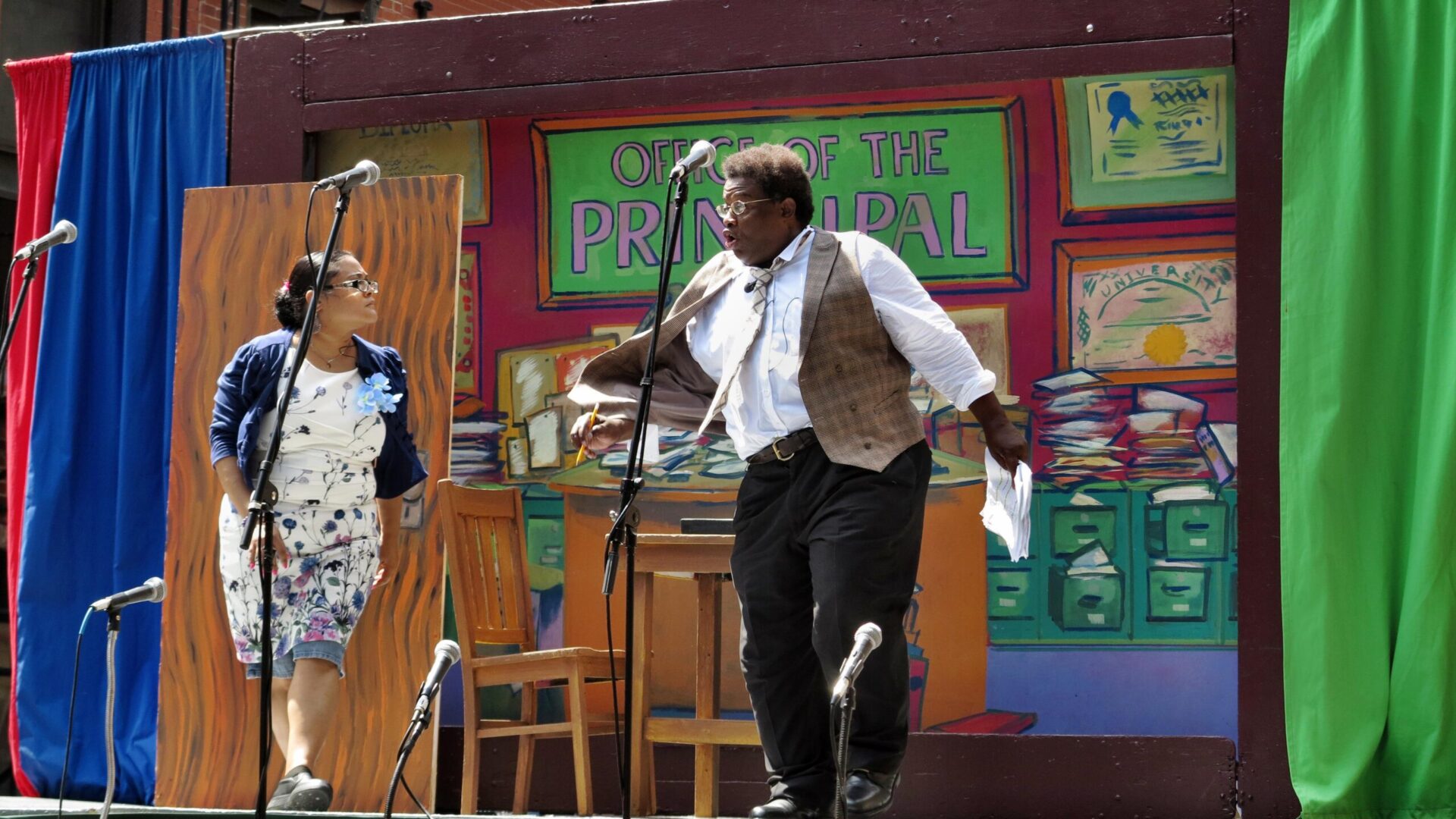 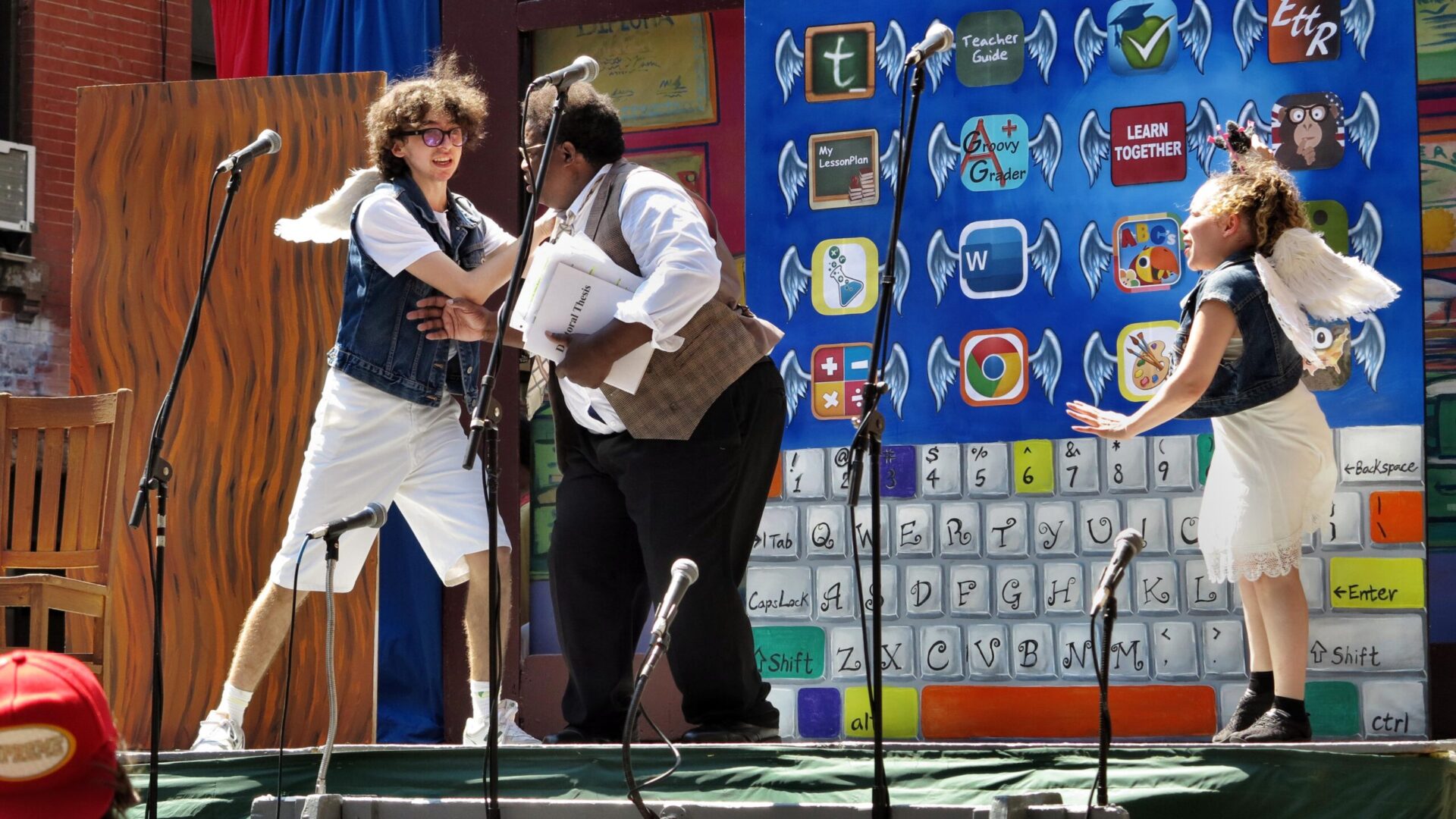 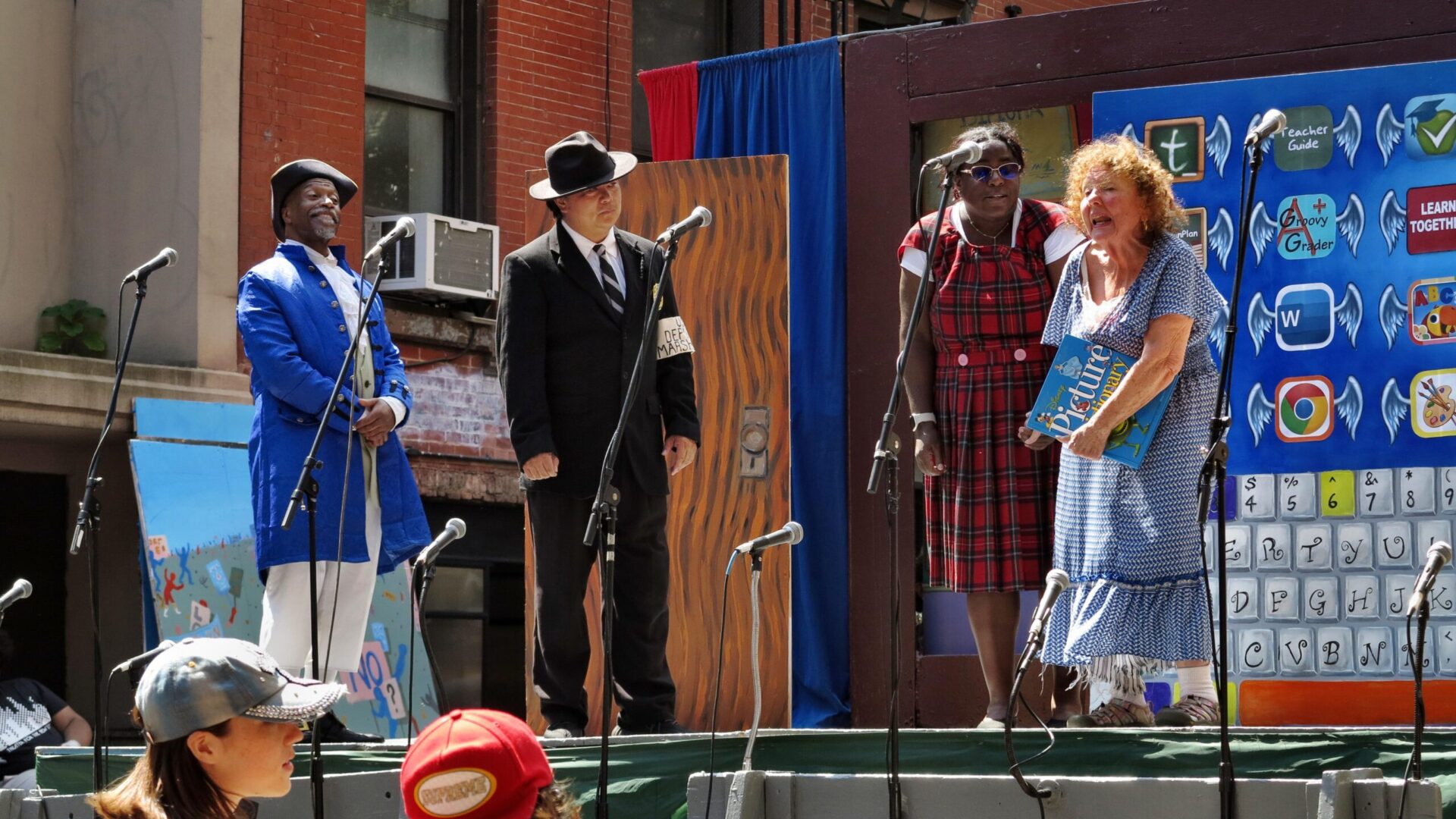 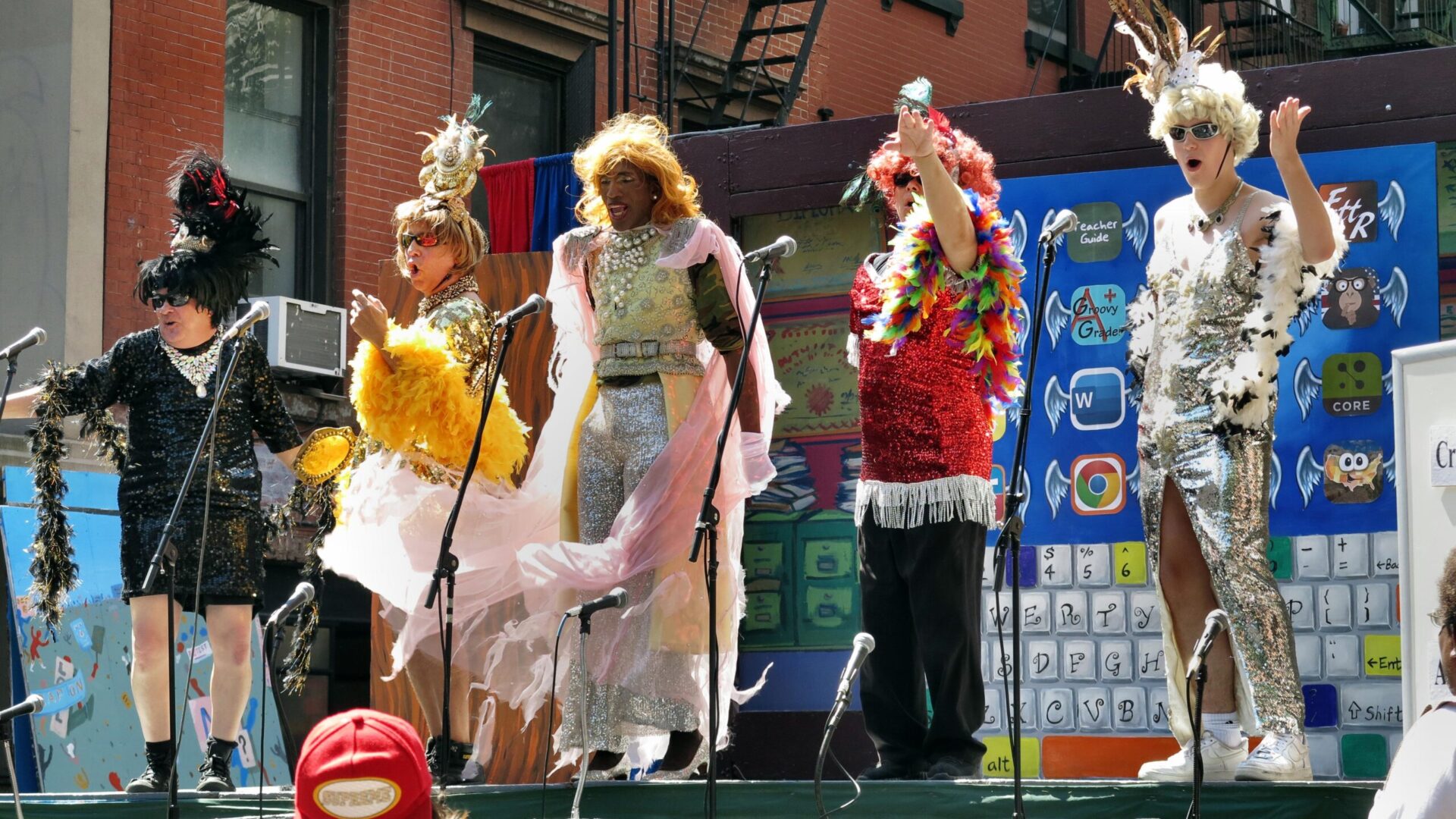 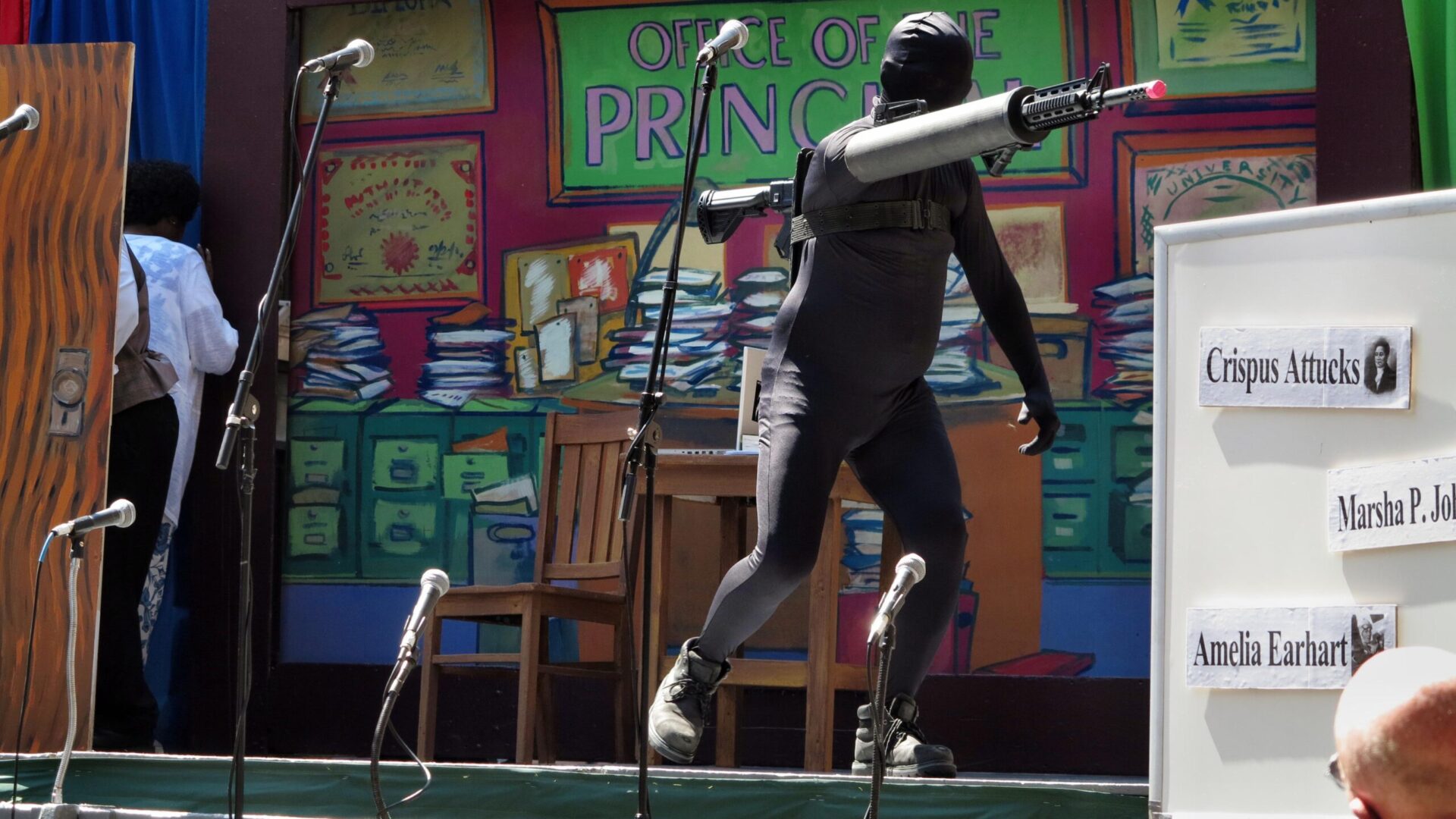 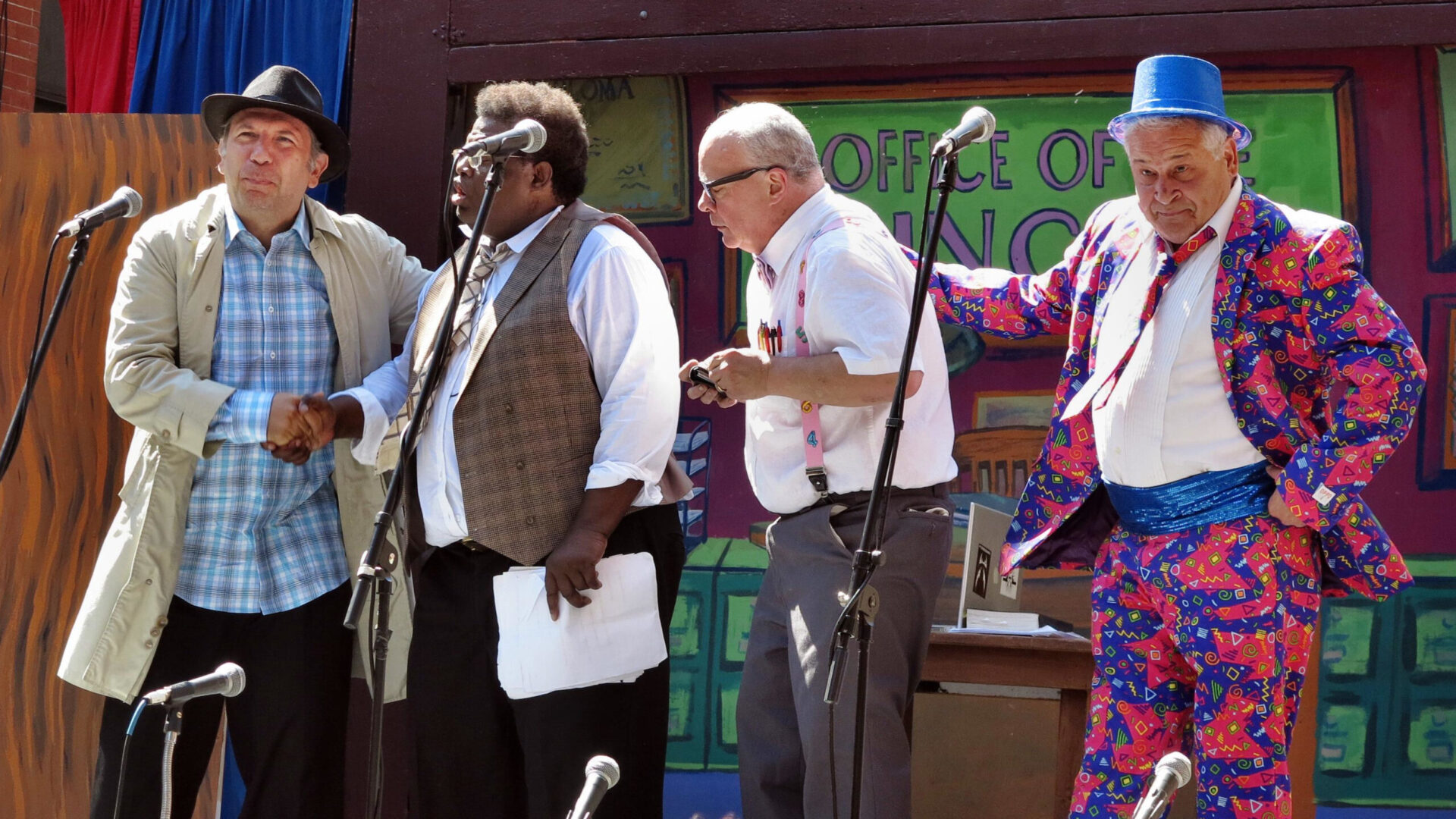 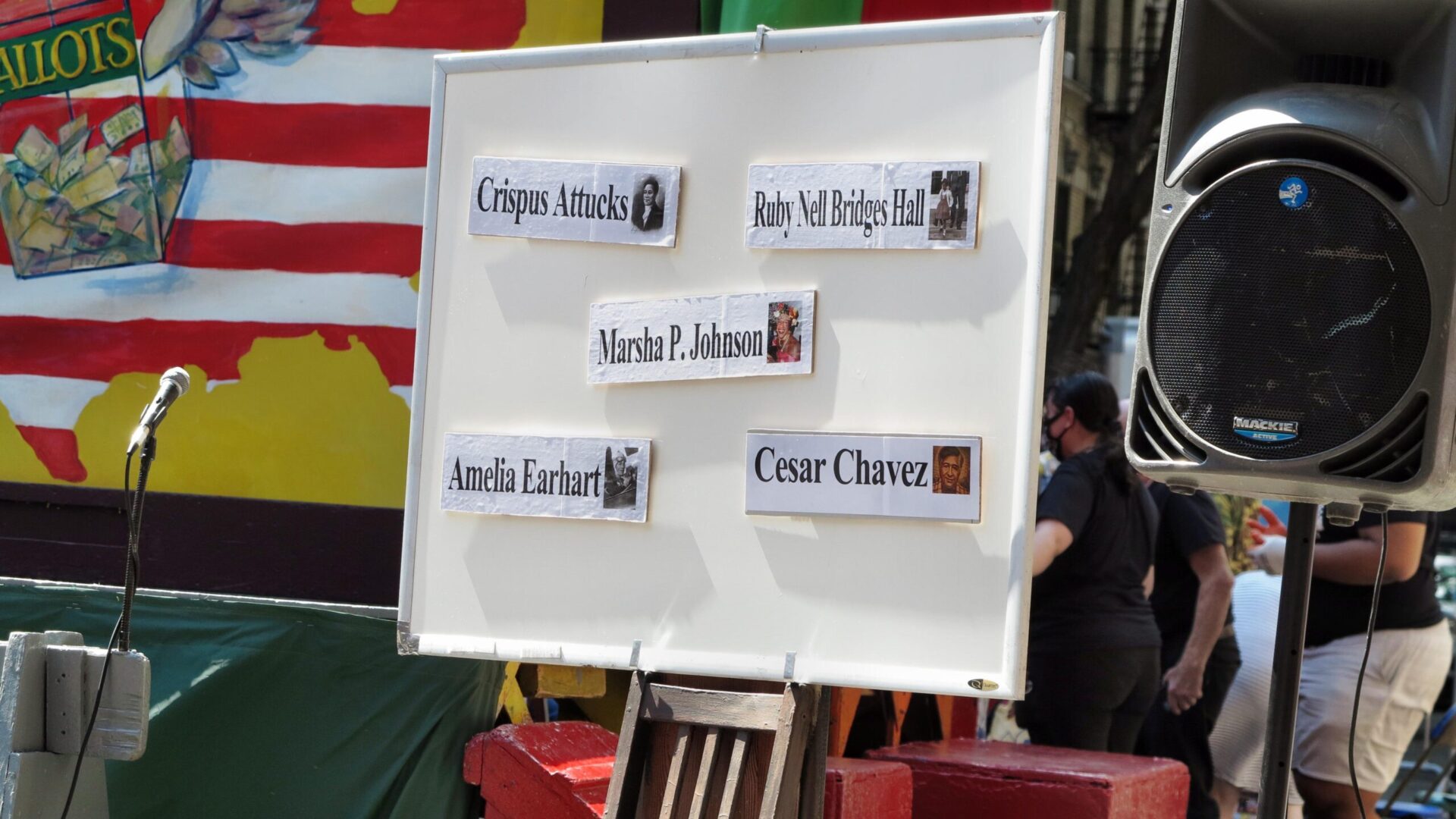 Free to the public. Audience info (212) 254-1109
Runs 1:15. Critics are invited to all performances.
Photos are available at: https://photos.app.goo.gl/CRnVRWxkrKx6EaQZA
B-roll of past TNC street theater productions is available upon request.

NEW YORK – Theater for the New City‘s award-winning Street Theater Company will open its 2022 annual tour Saturday, August 6 with “Teacher! Teacher! or PS I Love You,” a rip-roaring original musical which tells the story of a struggling teacher in an underserved neighborhood who puts her life on the line for her kids. Free performances will tour parks, playgrounds and closed-off streets throughout the five boroughs through September 18. Book, lyrics and direction are by Crystal Field; the musical score is composed and arranged by Peter Dizoza. (Schedule follows at bottom of this document.)

“Teacher! Teacher! or PS I Love You” is the story of the heavy hand of history on two teachers and a beleaguered principal. These educators teach against the background of the January 6th attempted coup, the desperate war in Ukraine, the constant threat of gun violence and the terrible mistakes of the Supreme Court. They see a growing consciousness in their students and a desire to take action. The educators, who endure the dilemma of teaching standard lessons in a time of crisis, now face the prospect of being asked to carry a gun! Their students bring to the classroom the debates heard around the kitchen tables in their homes. The principal finds a place for activism in school through a vivid dream that is the turning point of the play. The musical also celebrates the joys of a good book report, the brilliance of a Mother’s Day poem, an eloquent essay blasting climate change, and the ultimate triumph of graduation.

The production will be staged with an elaborate assemblage of trap doors, giant puppets, smoke machines, masks, original choreography and a huge (9′ x 12′) running screen or “cranky” providing continuous moving scenery behind the actors. The company of 22 actors, ten crew members, two stage managers, three assistant directors and five live musicians (led by the composer at the keyboard) will share the challenge of performing outside and holding a large, non-captive audience. The music will vary in style from Bossa Nova to Hip Hop to Musical Comedy to classical Cantata. The play is a bouncy joyride through the undulations of the body politic, with astute commentary couched in satire, song and slapstick.

TNC’s free Street Theater productions are delightfully suited for family audiences, since complex social issues are often presented through children’s allegories, with children and neighborhood people as the heroes.

TNC Street Theater’s leading actor is and has been Michael David Gordon, a teacher and performer with Irondale Theatre Company who is also bandleader of a performance group which plays classic rock in the subways. In this year’s show, he plays the school principal.

Theater for the New City has mounted a new musical for a five borough tour each year since 1976. In 2020, in response to the Covid-19 lockdown, TNC’s Street Theater production, “Liberty or Just Us: a City Park Story,” was an oratorio that live streamed for an eight week, 14 performance run. Each performance payed tribute to the park or other location it had been originally scheduled for. The popular tradition returned to live, in-person performances last year with “Critical Care, or Rehearsals for a Nurse.”

Author/director Crystal Field began writing street theater in 1968 as a member of Theater of the Living Arts in Philadelphia. She wrote and performed her own outdoor theater pieces against the Vietnam War and also curated and performed many poetry programs for the Philadelphia Public Schools. There she found tremendous enthusiasm and comprehension on the part of poor and minority students for both modern and classical poetry when presented in a context of relevancy to current issues. She realized that for poetry to find its true audience, the bonds of authoritarian criticism must and can be transcended. Her earliest New York street productions were playlets written in Philadelphia and performed on the flatbed truck of Bread and Puppet Theater in Central Park. Peter Schumann, director of that troupe, was her first NY artistic supporter.

In 1971, Ms. Field became a protégé of Robert Nichols, founder of the Judson Poets Theater in Manhattan, and of Peter Schuman, founder of Bread and Puppet Theater. It is an interesting historic note that “The Expressway” by Robert Nichols, directed by Crystal Field (a Street theater satire about Robert Moses’ plan for a throughway to run across Little Italy from the West Side Highway to the FDR Drive) was actually the first production of Joseph Papp’s New York Shakespeare Festival. Nichols wrote street theater plays for TNC in its early years, but as time went on, wrote scenarios and only the first lines of songs, leaving Field to “fill in the blanks.” When Nichols announced his retirement to Vermont in 1975, he urged Field to “write your own.” The undertaking, while stressful at first, became the impetus for her to express her own topical political philosophy and to immerse her plays in that special brand of humor referred to often as “that brainy slapstick.” Her first complete work was “Mama Liberty’s Bicentennial Party” (1976), in honor of the 200th anniversary of the American Revolution.

Field has an associate’s degree in Dance from Juilliard and a BA in Philosophy from Hunter College.

Field has written and directed a completely new opera for the TNC Street Theater company each successive year. She collaborated for eleven years with composer Mark Hardwick, whose “Pump Boys and Dinettes” and “Oil City Symphony” were inspired by his street theater work with Ms. Field. At the time of his death from AIDS in 1994, he was writing a clown musical with Field called “On the Road,” which was never finished. One long-running actor in TNC street theater was Tim Robbins, who was a member of the company for six years in the 1980s, from age twelve to 18.

Field has also written for TNC’s annual Halloween Ball and for an annual Yuletime pageant that was performed outdoors for 2,000 children on the Saturday before Christmas. She has written two full-length indoor plays, “Upstate” and “One Director Against His Cast.” She is co-founder and Artistic Director of TNC.

Composer Peter Dizozza is known for his simple, cheerful music with a Gershwinesque flair.  He began writing plays with music for La Mama’s Experiments Series in 1997 and became a regular composer for productions directed by George Ferencz. Among his TNC credits are his scores for Toby Armour’s plays “Aunt Susan and Her Tennessee Waltz” (2022) and “155 Thru the Roof” (2014). He appeared regularly in 2020-2021 in TNC’s weekly “Open ‘Tho Shut” walk-by theater productions, which demonstrated the theater’s ability to serve its neighborhood culturally during the lockdown. He has also provided scripts and scores for a wide range of independent projects of the Cinema VII collective including “A Question of Solitude” and “TentagatneT,” an experimental play produced by La MaMa in its Experimenta! 2007 Program.  His song settings include poems and texts by Shakespeare, T.S.Eliot and Thomas Hardy. He has accompanied plays by Maria Micheles (including “Night Park” at TNC), Leah Maddrie, Myron D. Cohen, Bruce Jay Friedman, Helen Slayton Hughes and Richard Vetere. He wrote an oratorio score for the legendary “Legs Like These,” Neil Ericksen’s adaptation of the myth of Atalanta.  He is a member of the Dramatist Guild, The Lambs Club and The New York Composers Circle and Chair of the New York City Bar Association Entertainment Committee.

SCHEDULE (AS OF AUGUST 5th)