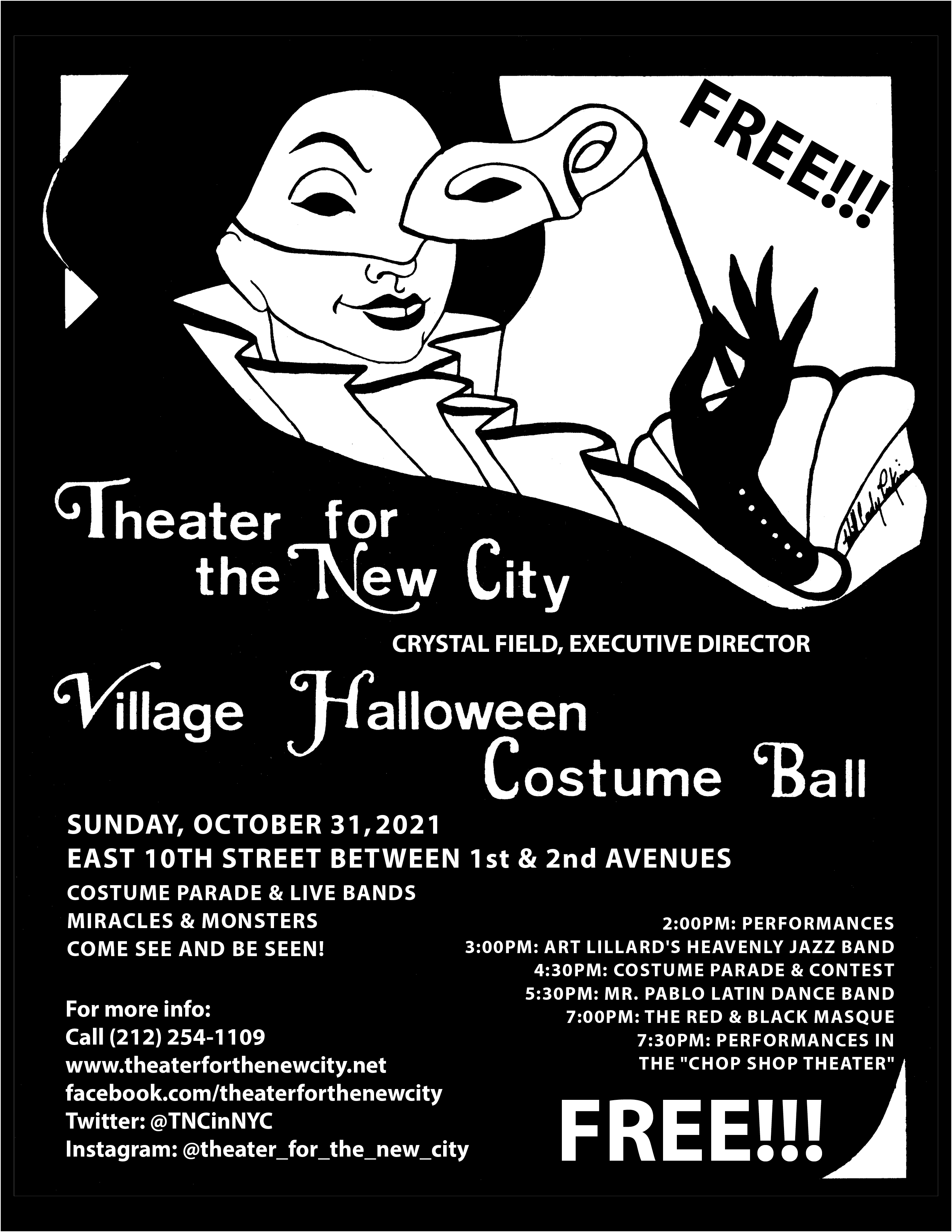 NEW YORK, September 24 — Theater for the New City (TNC) has presented its Village Halloween Costume Ball annually since 1976. With safety paramount this year, the fete will take place October 31 as an open-air celebration outside the theater, on East Tenth Street between First and Second Avenues.  A large tent will provide rain protection.  Performances, a costume competition and dancing to the music of swing and Latin bands are planned.  Events are scheduled from 2:00 PM to 10:00 PM.  Admission is free but donations will be gratefully accepted.  No reservations are necessary.  The entire public is invited.

LISTEN TO THEATER FOR THE NEW CITY’S HALLOWEEN PROMO

4:30 PM
Costume judging and prizes with the “Monsters and Miracles Costume Parade.” All costumed attendees are invited to march past a panel of celebrity judges.  Winners will receive one-year passes to TNC and a bottle of Moet Chandon champagne. Attendees will be judged in such categories as “Most Booster-Shot,” “Most Stimulus Packaged,” “Most Flood Controlled,” “Most Welcoming,” “Most Ozoned,” “Most Demilitarized,” “Most Solar,” “Most Herd Immunity” and “Most Economical.”  Emceed by T. Scott Lilly.

7:15 PM
“The Red and Black Masque,” an annual Medieval ritual show written by Arthur Sainer, scored by David Tice and directed by Crystal Field which is performed by torchlight.  The audience will be invited to participate.

10:15 PM
The Tell-Tale Heart: A Film by Danny Ashkenazi

REFRESHMENTS
From 2:00 PM to 7:00 PM, attendees can enjoy libations of beer, wine, cider and water (with or without chips) from an inside bar that will be selling through doors on East Tenth Street to the sidewalk, where a section will be roped off with chairs for revelers’ seating.

Neighborhood bars and restaurants are devising new original drinks–$3 to $5 TNC Halloween Specials–for patrons who can show a TNC Halloween Program.  TNC’s neighbors are always in the mix!

NEIGHBORHOOD GIVEAWAYS
Neighbors will display objects to be given away free, including children’s toys, baby clothes and household items.  Donations optional. TNC will have its own giveaway table.  Donations are always appreciated.

COME SEE AND BE SEEN AND CELEBRATE THE DAY OF DAYS AND NIGHTS OF NIGHTS!