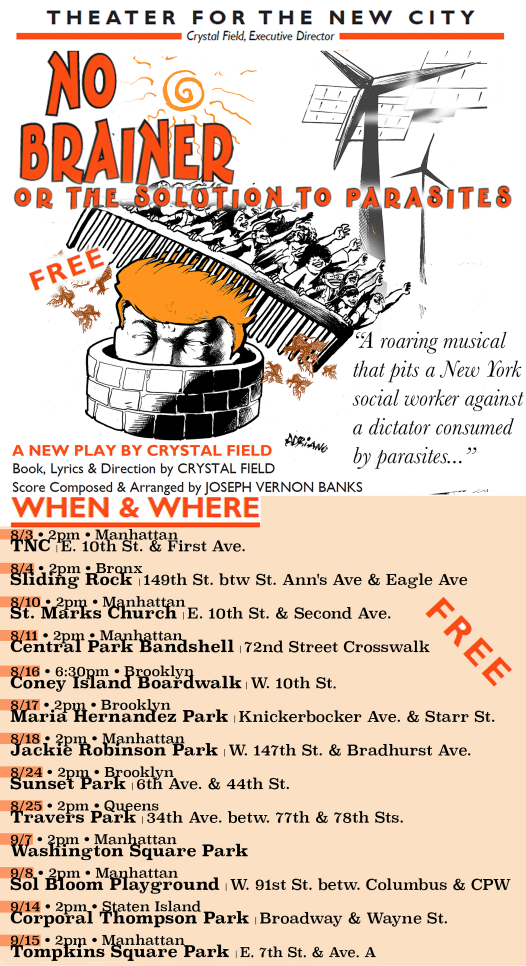 “No Brainer or the Solution to Parasites.”

A rip-roaring musical which portrays our road to national madness as a bad trip to Hades. Free performances will tour parks, playgrounds and closed-off streets throughout the five boroughs through September 15. Book, Lyrics, and direction are by Crystal Field; the musical score is composed and arranged by Joseph Vernon Banks.

A Social Service Provider (working for the NYC Department of Social Services) is not interested in politics at all. He is fighting valiantly in the natural world to protect families facing eviction, children in temporary housing and immigrants struggling for citizenship. But the mythic world, headed by Mr. Pluto, is set on edge because a raging, somewhat drunk real estate magnate from a TV reality show has invaded its sacred sanctuary in Hades. There he has drunk deeply from the cauldron of woes–a vessel where the underworld gods cleanse a nation’s soul by boiling out its historically tragic mis-steps, including those of genocide, slavery, and war. Ravenous for notoriety, he slurps down the steamy stew, gobbling down all the horrors and recklessness to which our time is the heir. The bubbling brew, extracted from the garbage of history, is full of parasites, which infect his brain and direct the would-be dictator/strongman toward the highest office in the land.

The heroic Social Worker accepts the challenge of helping to save the world from this grandiose charlatan. But he can‘t just chant, “Circle, circle, dot, dot – now you’ve got the cootie shot!” Our champion must survive the horror of Russian spies, drone warfare, faceless armies, and man-made climate change. What ensues is a battle of light and dark, respect and protection versus corruption and power madness. Finally, in closing the borders, the imperious fraudster becomes embedded in his own Wall and finally repents. We learn that his businesses owe so much money that they are bankrupt and he is actually stone cold broke and homeless. He grovels for the succor of public assistance and–surprise!–the Social Worker takes his case. He will find him a home! Mister Pluto arrives to reveal that he, too, is a social worker. The Underworld Gods, together with the Social Worker, will take care of this mythical ogre down below. They will find him a home in the cauldron of historical garbage. Up above, the people dance! Once again we have saved our planet and our history through brother-and-sisterhood, and through history, we have saved ourselves.

The production will be staged with an elaborate assemblage of trap doors, giant puppets, smoke machines, masks, original choreography, and a huge (9′ x 12’) running screen or “cranky” providing continuous moving scenery behind the actors. The company of 30 actors, ten crew members, two stage managers, three assistant directors and five live musicians (led by the composer at the keyboard) will share the challenge of performing outside and holding a large, non-captive audience. The music will vary in style from Bossa Nova to Hip Hop to Musical Comedy to classical Cantata. The play is a bouncy joyride through the undulations of the body politic, with astute commentary couched in satire, song, and slapstick.

TNC’s free street theater productions are delightfully suited for family audiences, since complex social issues are often presented through children’s allegories, with children and neighborhood people as the heroes.