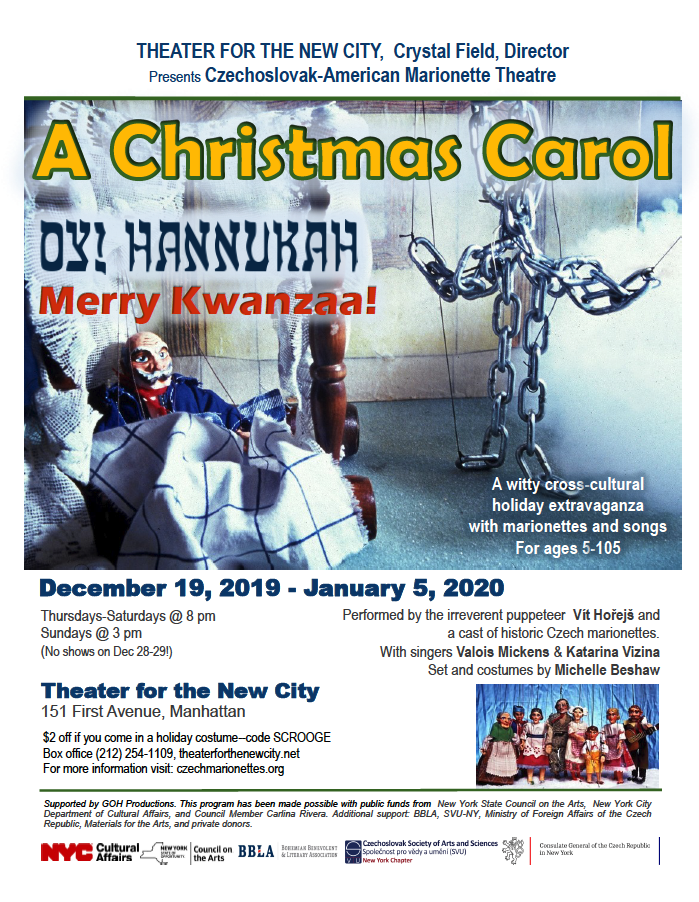 An adaptation of Dickens’ classic with Old World accents and New World inclusiveness.

For the delight of audiences aged 5 to 105, Czechoslovak-American Marionette Theatre performs “A Christmas Carol, Oy! Hanukkah, Merry Kwanzaa.”  Adapted, directed and reinvented by Vit Horejs, this toy-puppet theater extravaganza is a new take on Charles Dickens’ classic with Old World accents, New World inclusiveness and holiday songs.  Into the familiar story are woven a surprising and delightful blend of English, Jewish, African, American and Czech winter rituals and customs, all performed by over three dozen marionettes ranging in size from four to twenty-four inches as well as found objects and toys.

Vit Horejs operates the whole cast of puppets, backed up by a live chorus: Czech, English, Hebrew, Slovak, Spanish & Swahili songs are performed by an “a capella monumentale” choir of Katarina Vizina (a transplant from Slovakia) and Valois Mickens (West African/Celtic/Native American origin).

The scenic design uses elements of a made-in-Prague 1920’s toy marionette theater donated recently by Madeleine Albright and an identical set that Vit Horejs and his mother played with in their childhoods.

“[a] delightful holiday hodgepodge that still hews closely to Dickens’s tale and also has contemporary humor.” –Laurel Graeber, New York Times “exactly what an audience would want from a holiday show. It tells a familiar tale with an added twist, it reminds us about the spirit of the season, and it puts a smile on the face of even the scroogiest of spectators.  — Kelly Aliano, New York Theatre Wire.